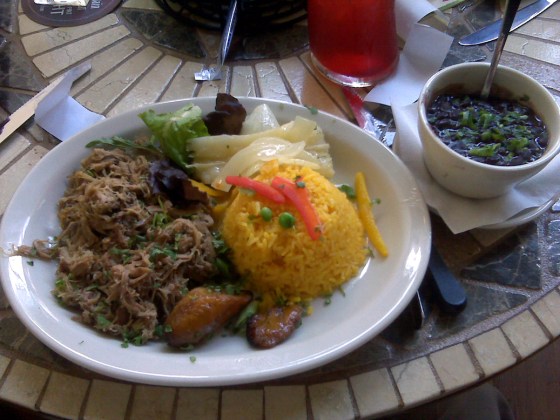 Since I’ve become a Mad Man, I’ve branched out a bit in my eating out. Since for me every unknown menu is like a minefield, my usual M.O. is to approach eating out the way a cautious commander approaches a military campaign: Only on familiar terrain using proven tactics — in other words, going to three or four places where I know the menu, and only ordering one or two things from it. (And don’t even eat out, if it can be avoided. Mamanem know what you can eat.) Hey, it’s kept me alive so far.

But Lanier, Brian and Lora eat out pretty much every day, and invite me along. So I’ve come to try and enjoy new things at Al Amir, and Nick’s, and Doc’s Gumbo Grill, the Mouse Trap and other places. I still pull them toward my old faves — Yesterday’s, Longhorn and the like — whenever I can get away with it, but my horizons have been broadened.

Today, however, I must report having enjoyed the best new thing I’ve tried since starting at ADCO. It was at Mojitos Tropical Cafe on Gervais, a place that just opened a couple of weeks back. It was fantastic, especially what I had — the pulled pork with saffron rice, black beans, sweet plantains and yuca con mojo.

We also had a great chat with the matriarch of the family that runs this joint and Salsa Cabana, Jane Fishburne, whose mother was Spanish and comes by this sort of cuisine honestly (although it’s her daughter, Lynette, who does the cooking). I gave her a card and urged her to consider a blog ad. She responded by saying that the Shop Tart has brought them about half their business so far.

So I’ve been scooped. In fact, the Tart even wrote about the place before it was opened. An excerpt:

Speaking of good stuff, Tracie and the Shop Tart spent a while chatting with owner Jane, who is in the process of opening another business, Mojito’s Tropical Cafe on Gervais in the space formerly occupied by night club Hush. She is awesome and introduced them to her daughter Lynette, who will be the chef at the new place. They also met Jane’s son Gabriel and his girlfriend Crystal, who might be the best-looking couple in all of Columbia, if not the world. They noticed the Shop Tart’s empty glass and insisted on getting her next round. They asked what she was drinking. She hesitated, not wanting to be greedy. “Vodka soda,” she answered, not wanting to admit to the pricey Grey Goose she has come to love. (Thank you, Fergie.) Crystal’s response? “Grey Goose, right?,” with a wink. Perceptive lady. (And yummy vodka.)

So she was ahead of the curve on that. Not to mention being way ahead of me on the blog ad front. Oh, well — her success is well deserved.

And Mojitos is deserving of all the success the Vista can provide. I’ll be going back, for sure. And if — no, when — you go, be sure to tell Jane you read about it here. And try the pulled pork. It was pretty awesome. For one used to barbecue, the more subtle flavorings on the meat were a really nice change of pace, and a great accompaniment to the beans and rice.

Oh, and watch out — while the place wasn’t crowded when I was there, Columbia’s Mad Men are discovering it, so it’s liable to be jammed before you know it. David Campbell from Chernoff Newman came in with a couple of others just as we were leaving. Dang, just like that guy Ted Chaough tracking Don Draper — every time I look in my rearview mirror, there’s Campbell… 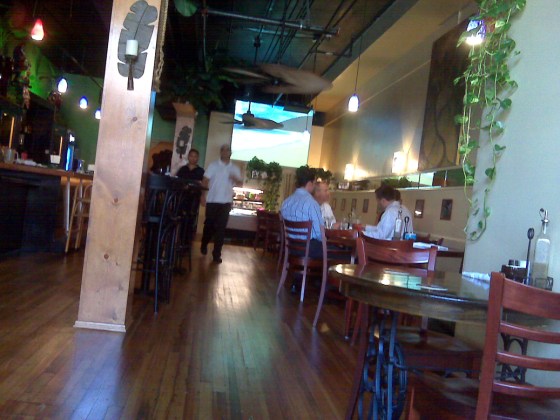