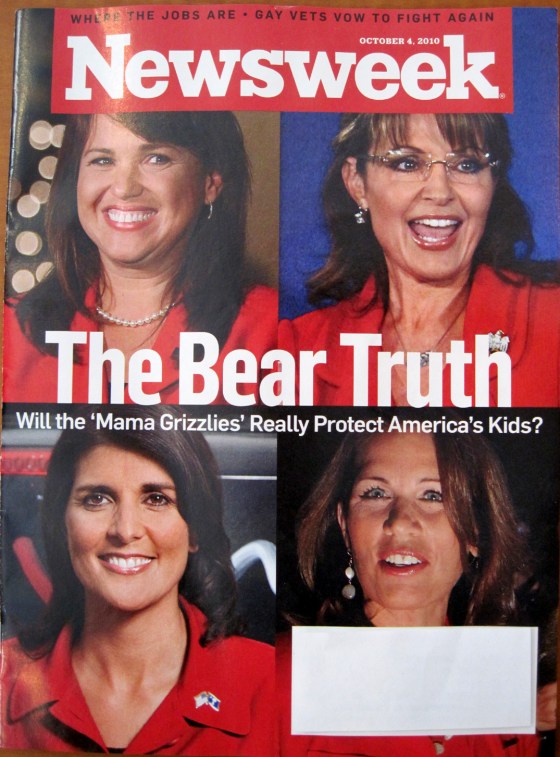 When Newsweek first put Sarah Palin (I mean, Nikki Haley — I know the difference, but the superficial, pandering twits editing Newsweek apparently don’t) on its cover, I wrote about how Vincent Sheheen faces a problem that no other candidate for governor of South Carolina had ever faced — an opponent who gets vast amounts of free national media coverage. It’s a disadvantage that no candidate can raise enough money for paid media to overcome. It distorts everything. (See “The Newsweek endorsement of Nikki Haley,” July 6.) I wrote:

Oh, you say it’s not an endorsement? Don’t bore me with semantics. As I said, the national media — not giving a damn one way or the other about South Carolina, or about who Nikki Haley really is or what she would do in office — is enraptured at the idea that South Carolina will elect a female Indian-American (Bobby Jindal in a skirt, they think, fairly hugging themselves with enthusiasm), which just may be the most extreme example of Identity Politics Gone Mad that I’ve seen.

I told you we would have to expect this. And this is just the beginning…

Hey, am I a prophet or what? Now, in their slavish devotion to all things Sarah (and Sarah surrogates are almost as good, especially if you can create a collage of them WITH Sarah), Newsweek has done it again.

And do they have any serious, substantive reason to do this? Of course not. The putative reason for putting Nikki’s smiling mug on the cover again is to discuss the burning issue of “mama grizzlies.” I am not making this up.

Of course, if you turn inside to one of the few remaining pages in this pamplet — right in there next to the scholarly treatise on “Men Look at Women’s Bodies: Is Evolution at Work?” — you can find some home truths about Nikki. Such as:

Haley, who has two children but has never referred to herself as a grizzly [so why the freak did you put her on this stupid cover? never mind; I realize there’s no rational answer, beyond maybe that you had a picture of her in red], is just the sort of pro–business, low-tax, limited–government conservative Palin loves. Her platform is focused mostly on economic issues: creating jobs and unleashing entrepreneurial energy by slashing taxes. She holds herself out as a paragon of fiscal responsibility (never mind that she and her husband have failed to pay their taxes on time in each of the past five years).

But I must ask you: How many of the undecided voters who might be gullible enough to be razzle-dazzled into voting for Nikki do you think will read that far into the piece? Just being on this cover is all Nikki could possibly ever want or need from Newsweek.

Folks, I gotta tell ya — I never thought a whole lot of Newsweek. Back in the day when I was even in the market for such a publication, I always read TIME — and I haven’t done that in 30 years. Whatever value that format had ceased to be anything you could take seriously so, so long ago. Those publications became pretty much everything I disdain about TV “news.”

Recently, The Washington Post apparently decided the same, selling the mag to a guy who made his fortune selling stereos. And as The Wall Street Journal observed:

Since he agreed to purchase the magazine from Washington Post Co. earlier this month, pundits have called Mr. Harman’s motives—and sanity—into question. He took on more than $50 million in liabilities and agreed to keep most of Newsweek‘s employees—all for a magazine on track to lose at least $20 million this year, according to documents reviewed by The Wall Street Journal.

Good luck with that, pal.

My advice to you readers? You want to read news in a magazine format? Go with The Economist. That is still a serious source of news and commentary. Interestingly, it calls itself a “newspaper,” in spite of its format. It’s certainly better than all but a handful of newspapers on this side of the pond. Yet another reason to love The Economist — so far, no Nikki Haley covers (that I’ve seen, anyway).

27 thoughts on “No wonder The Washington Post dumped Newsweek”