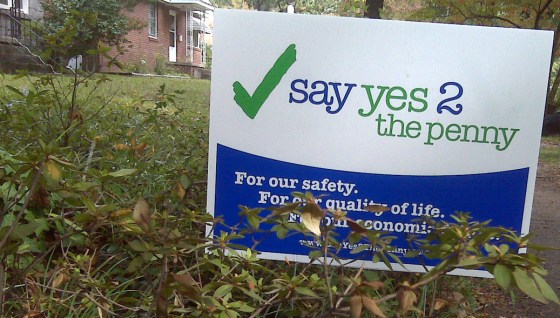 Once the clan had wandered back, in our several vehicles (12 of us, 3 vehicles), from Memphis after the big wedding weekend was over, my eldest texted me to ask:

To which I replied, in all innocence:

No, not that I recall.

Note that I did not add, “… at this point in time,” because it would have sounded too Watergatish. She wrote back,

Someone stuck a sign in support of the penny sales tax in my yard. No idea who.

Well, I continue to have no memory of taking any action to lead to that eventuality.

But it was certainly a good idea! So, nice going to whomever. And I’m taking it as a good sign, so to speak, that the item was still up in her yard when I drove by and took the above picture at 3:25 PM today.