I saw”Green Zone” over the weekend, and it was a corking good thriller. Just as long as you don’t take the premise seriously.

No, wait — I need to refine that: As long as you don’t take too seriously the one spectacular conceit that does the most to drive the action, which is this… There’s this Iraqi general who is sort of the movie’s Great White Whale, only there’s no one Ahab — EVERY character is frantically pursuing him, with each character having a different motive for doing so. Matt Damon’s character wants him because he thinks he knows where the WMD are, and it’s his (Damon’s) job to find them  (he plays a chief warrant officer named Miller). An idealistic one-legged Iraqi (his other leg is in Iran) wants to find him because of what the general and his ilk have done to his country. A CIA officer wants to find him because he believes the Army is the key to preventing the insurgency. A Wall Street Journal reporter wants to find him because he is the mysterious source Magellan that a Pentagon official has told her has provided intel on where the WMD are — reports that she has passed on uncritically in the paper. The Pentagon official, played by Greg Kinnear, want to find him and kill him before he tells everybody the truth.

What truth? This “truth” (SPOILER ALERT!): We eventually learn that before the war, Poundstone (Kinnear’s character) had secretly met the general in Jordan, where the general told him there WERE no WMD. And Poundstone returned to Washington and told everyone that the general had told him the exact opposite, even telling him where to find the weapons. So we invade Iraq, and Miller’s unit risks their lives going to these supposed WMD sites and coming up empty.

This makes Poundstone the Great White Whale of all those antiwar folks who believe “Bush lied” — the perfect representation of the supposed great misrepresentation. He, Poundstone, KNEW the truth and deliberately lied. No mere wishful thinking. No making a mistake (the mistake made by pretty much the whole world — the debate about the invasion wasn’t over whether the WMD existed, but about the best way to get them out of Saddam’s hands). A big, fat, montrous lie.

Which, of course, didn’t happen. If something like that had happened, someone of the millions of people who would love to find out such a thing and tell the world — from the antiwar Democrats who now control our government and have access to all its secrets, to Julian Assange, to the director of this movie — would have let us know by now.

So…  the bad news is that people will see Green Zone and think that such a thing happened. And that’s bad even if you are deeply opposed to the war and want to avoid such conflicts in the future, because it keeps you from confronting whatever REALLY happened and realistically assessing how to keep it from happening again. Politically attractive fantasies are just dangerous all around — as the antiwar folks would no doubt say about the delusion that there were WMD.

The good news, though, is that it’s a great action flick. And the other questions the movie raises — including some serious ones that deserve answers — are intelligently, provocatively and even realistically portrayed. Where the movie falls down is wherever it touches upon the Poundstone character. And I mean this in an artistic, esthetic sense as well as political: Kinnear’s character is cartoonish, the portayal more suited to low farce than to serious drama. When he’s on screen, the quality drops. NO ONE would believe this guy; if he told you your mother loved you, you’d say “What’s his angle?” He’s just ridiculous. He might as well be wearing a black cape, stovepipe hat and Snidely Whiplash mustache.

Everybody else is credible; everybody else feels real. While comparisons to the Bourne movies are inevitable (with Damon and the director of the second and third films in that trilogy on board), this film is far more believable, in that there are no superheroes like Bourne in it. (The flaw that it shares with those films is the aforementioned fantasy plotline about a vicious government conspiracy — a great plot device, as long as you don’t start thinking stuff like that really happens.) In fact, the closest thing to Jason Bourne is the Special Forces guy who promptly beats the stuffing out of Damon’s character when he fails to give him what he’s after. And that violence is realistic, not balletic.

Other things that are good, and deserve more explication, are such things as the issue of whether we should have worked with the Iraqi army rather than banishing it into insurgency. If the director wanted a political point, that would have been an excellent one to stick with.

Perhaps the most provocative questions raised surround the frantically earnest one-legged Iraqi, “Freddy.” He tries to approach harried soldiers to give them critical information, and gets knocked around for his trouble. He is forced into suicidally dangerous (for a guy who has to live there) situations in order to help the Americans. In the end, (MAJOR SPOILER ALERT) he raises the film’s most provocative question when he takes matters into his own hands with deadly force. Damon’s character, persuaded by the CIA that the general must be found so we can work with him to prevent the insurgency (I REALLY MEAN IT — MAJOR SPOILER ALERT!), manages to get to him before the Special Forces guys who have been sent to kill him. You think Damon has won the day. Then out of nowhere comes Freddy with a pistol and blows the general away. Freddy then says to Damon — and I don’t have it in front of me, so this might not be verbatim — “YOU don’t get to decide what happens here.”

If you want a good antiwar message, one you can chew over productively, that would be it. But the whole Poundstone thing is offensively ridiculous. You want to talk about a Big Lie, suggesting that anything that clearly duplicitous happened qualifies.

That’s particularly insidious since we are told this story is based in nonfiction. Oh, and if you don’t want to believe me, believe Richard “Monty” Gonzales, upon whom Damon’s character Miller was based, and who acted as technical adviser on the film:

“Green Zone” contains several messages, an unavoidable consequence of making a film of this genre. Critical blunders preceding the invasion, chiefly the bad intelligence that led us to war, made certain that no quick victory would be achieved and certainly undermined U.S. credibility around the world. Later, the U.S. directed a de-Bathification policy which disenfranchised a massive section of the population and helped fuel an insurgency. Consequently, any hope of victory in Iraq was made vastly more complicated and costly — as the last 7 years have proven. I believe this is true.
.
However, “Green Zone” also suggests that we were lied into the war in Iraq; a subtext that is unfortunately being twisted by some in order to give credence to a bumper sticker I deplore, the mantra which has become the left’s version of the war — which is well on its way to becoming the Iraq conflict’s official history — “They lied; people died.” As intriguing as that idea may be, it’s simply not true. 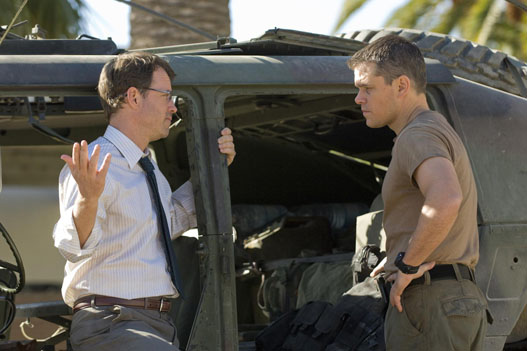 2 thoughts on “Green Zone: good flick, if you take it for what it is”