Over the weekend, Kathryn F. e-mailed me this link:

And I have to say, I was appalled at what I found there… I don’t mean this stuff:

During the recent fight over extending unemployment benefits, conservatives trotted out the shibboleth that says the program fosters sloth. Sen. Judd Gregg, for instance, said added unemployment benefits mean people are “encouraged not to go look for work.” Columnist Pat Buchanan said expanding these benefits means “more people will hold off going back looking for a job.” And Fox News’ Charles Payne applauded the effort to deny future unemployment checks because he said it would compel layabouts “to get off the sofa.”

The thesis undergirding all the rhetoric was summed up by conservative commentator Ben Stein, who insisted that “the people who have been laid off and cannot find work are generally people with poor work habits and poor personalities.”

The idea is that unemployment has nothing to do with structural economic forces or rigged public policies and everything to do with individual motivation. Yes, we’re asked to believe that the 15 million jobless Americans are all George Costanzas — parasitic loafers occasionally pretending to seek work as latex salesmen, but really just aiming to decompress on a refrigerator-equipped recliner during a lifelong Summer of George…

I mean that gross, unfair, insensitive photograph. As a guy who spent close to a year unemployed, I deeply resent such a depiction. It’s totally unrealistic. My gut is nowhere near that big. In fact, mine is much better suited structurally to balancing the remote control on while snoozing in front of the Boob Tube. I can prove this. I have demonstrated this, time and again. And besides, I was just monitoring C-SPAN, waiting for Congress to extend my benefits… 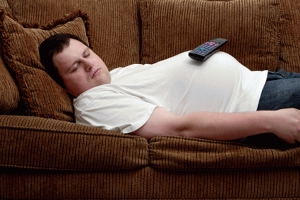