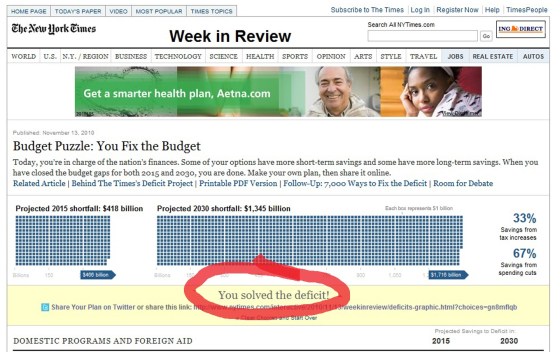 Thanks to Phillip for bringing our attention to this NYT page, where you, too, can try to eliminate the national deficit.

I managed to do it. And it wasn’t especially hard. It was a little hard, just not especially. I’ll be happy to let the Congress use my plan, for a consideration of a mere half a percent of the amount by which I reduced it.

The only thing I did that I had real qualms about (and yeah, I know that credible arguments can be mounted against everything I did, but the rules of the game, in real life and here, are that you’ve got to do something) was when I decided to cap Medicare growth starting in 2013. That sounds to me suspiciously like the kind of arbitrary limit that Tom Davis et al. want to enact in South Carolina. But I excused myself in the hope that it would exert downward pressure on costs. I’m pretty sure it wouldn’t, though. The only way the federal gummint would really be able to lower costs is if we are ALL in the program — then there wouldn’t be anyone left to raise prices on. Note that I did NOT raise the age of Medicare eligibility. That’s because I think it should be extended to everybody — except that those of us under 65 would pay for it, just the way we do for employer-provided insurance.

I really went back and forth on that one. But if I didn’t do it, I fell short of the goal, and there wasn’t anything else I would consider doing. If I did do it, I exceeded the goal. (As you can see if you check my plan, I have surpluses. Am I good or what?)

And of course, of COURSE, we should raise the age for full Social Security eligibility. Average life expectancy today is 77.9 years. Those born in 1900 only expected to live 50 years. So 70 is like the new, I don’t know, 45.

And yeah, I know states are hurting, but aid to states is just not a core function — and maybe not even a legitimate function at all — of the federal government.

I didn’t touch military spending, particularly not ongoing operations — except for cutting some new weapons programs.

Overall, 33 percent of my deficit reduction came from tax increases, and 67 percent from spending cuts. So take THAT, all of you think I love all tax increases.

Seriously, I charted a middle road on the whole Bush tax cuts issue, because I find both sides of the debate sort of persuasive and sort of not. Democrats’ ranting about Republicans’ “tax cuts for the rich” leave me cold. So does Republicans’ love for tax cuts for the rich. Heh. The issue is what makes sense for both our economy and the proper functions of government. Hence my middle road.

16 thoughts on “I took care of that deficit thing. Ya got anything else needs doin’?”