That’s John in the foreground, preparing to take a picture at The Jackson Sun reunion of 2005.

Today, my friend Kevin Dietrich brought this obit to my attention:

I had not read it, but I must have received a telepathic message of some sort. Because one day this past week, for no reason, I thought of this unfinished blog post from June 28, 2007. I had started writing it after reading that David Broder piece that it mentions at the start. Then after typing away for awhile, I got sidetracked and never finished it.

But for some reason the other day, I got to thinking about John Parish. And I thought, one of these days I’ll finish it. I had no idea as I thought that that “the Bear” was already gone.

Here’s my belated remembrance of John Parish. Tennessee journalism is unlikely to see his like again…

Years ago, Lamar Alexander, the senator from Tennessee, told me of a lesson he had learned as a young man on the White House staff: It is always useful for the president to have at least one aide who has had a successful career already, who does not need the job, and therefore can offer candid advice. When he was governor of Tennessee, Alexander made sure he had such a man on his staff.

That brought back the memories, even more than seeing fellow Memphis State grad Fred Thompson yesterday.

The man on Gov. Lamar Alexander’s staff who best fits that description is John “The Bear” Parish, who became the new governor’s press secretary in January 1979, after having long established himself as the Dean of Tennessee political journalism. It was a very unusual appointment, since new governors seldom turn to such people. (Although Mark Sanford did in picking Fred Carter as his chief of staff. Mr. Carter left the office early in the Sanford administration to return to his job as president of Francis Marion University in Florence. Just as well, since as near as I could tell the governor wouldn’t listen to him anyway.)

Unlike Lee Bandy, John did not work for the state’s largest newspaper. He wrote for The Jackson Sun. The photograph above is from a 2005 reunion of folks who worked at that paper when I was there, from 1975-85. John is stepping forward to take a picture on his own camera. (That’s me in the striped shirt just over his shoulder. To my left is Richard Crowson, now editorial cartoonist with The Wichita Eagle. [But, since I wrote this, laid off like me.] On the other side of Richard is Mark Humphrey, the photographer who took the shot of me at the bottom of this post back when we were covering the Iowa Caucuses in 1980, and who is now with The Associated Press in Nashville. To my right is Bob Lewis, the former center for the Ole Miss football team who is now with the AP in Richmond. Of course, I could tell a story about each person in the picture, but what do you care, right? Well, it’s my blog, so I’ll wax nostalgic if I choose.)

John was a legend, a uniquely gifted, hard-working journalist who made a big impression on me at an early point in my own career. Frankly, I have never seen his like since. A few points from the rich mine of Parish lore:

That editor gig worked out well, there and at two other papers, until The State decided it didn’t need me any more last year. In the last years, especially after Lee Bandy retired, I got to thinking that I was finally getting there, I was finally on the verge of becoming that gray eminence that would make me to SC politics what John Parish was to Tennessee’s. But that was wishful thinking. I never came close to being John Parish. No one could. 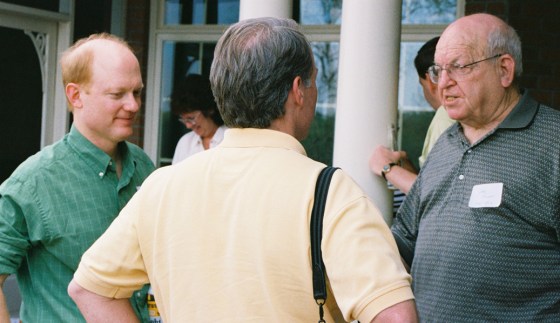 Another shot from the reunion. John, at right, is chatting with Kevin Barnard of The Tampa Tribune and Mark Humphrey. Mary Reed and Joel Wood are in the background.