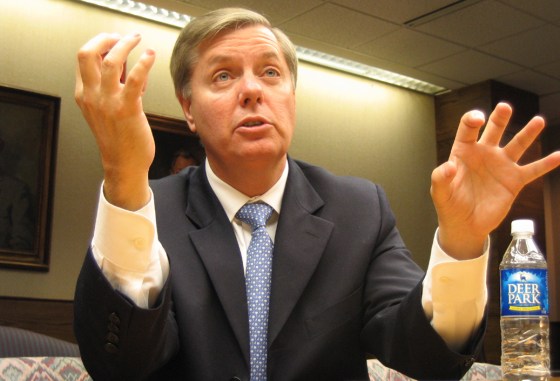 Seeing the story about Lindsey Graham and immigration in The Stet Peppah today reminded me of this release I got from the senator yesterday:

“Illegal immigration is a nightmare for America.  Giving a pathway to citizenship without first securing the border is an inducement to encourage more illegal immigration.  This is nothing more than a political game by the Democrats to try and drive a wedge between the Hispanic community and Republicans.

“Today’s cynical vote on the DREAM Act, along with a series of other votes, convinces me that the Democratic leadership in the Senate does not get the message from the last election.  They care more about politics than policy in a variety of areas, including illegal immigration.”

Now truth be told, the senator isn’t really being two-faced on this. Only if you believe in the misrepresentation of his critics do you think he’s changed his mind on the overall issue. He ALWAYS wanted to secure the border. To him and John McCain, this was first and foremost a national security issue — you need to know who’s in your country. That’s why you would both secure the borders and regularize the people who have already gotten in. Big Brother (and you know I love Big Brother) doesn’t need folks running around off the grid.

So basically what we have here is a change of emphasis. And that change really started as soon as 2007, when the debate over the previous attempt at serious, comprehensive immigration reform was still going on.

The one thing that Sen. Graham has said lately that really seems a departure for him was when he went out of his way to say that children born here to illegal parents shouldn’t be citizens. If anything indicates that he’s running scared and trying to head off a primary challenge from Mark Sanford or someone four years from now, that would be it. But senators, particularly this one, don’t run that scared that early. There are other explanations. And next time I speak with the senator, I hope to hear it. I doubt I’ll hear it through the MSM between now and then.

12 thoughts on “Graham: Change of mind or change of emphasis?”