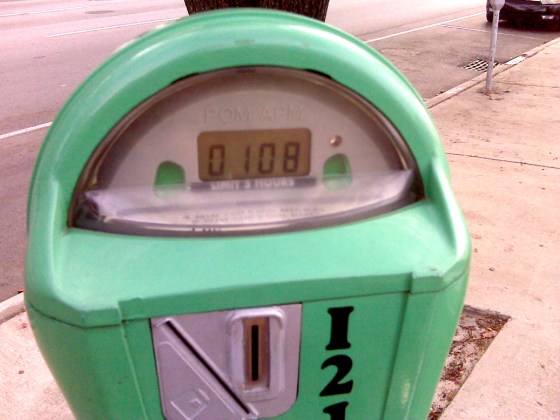 You can have your grainy pictures of Sasquatch -- here is my photographic proof of the existence of Parking Meter Santa!

It was more than three years ago that I first posited the existence of a Parking Meter Santa, going about Columbia cheerfully plugging money into meters and chucking softly to himself, thinking of the joy he would bring to the next person to park there.

I based this on having found a space, in October 2007 (it seemed to me more recently; I was shocked that it was on the old blog) on Assembly Street with an hour and 54 minutes left on it. Ho, ho, ho.

This leaves me feeling much cheerier about the season.

Last night I watched part of Ben Stein’s documentary in which he seeks to debunk the anti-religious gospel of such famous atheists as Richard Dawkins. Well today, we have a settler for those who don’t believe in Santa… Ha! Take that!…

6 thoughts on “Parking Meter Santa lives! And he’s back!”