That is, if you mind being groped.

Personally, I was struck by how nonintrusive security was on my recent flights across the ocean and back. You’d think that on an international flight to and from a country that’s as involved (as target, and as combatant) in the War on Terror as the UK, you’d see security as tough as anywhere (with the possible exception of Israel).

The only sign I saw of really heightened security during the whole trip was when we went to see Downing Street, which is totally barred off and heavily guarded, with at least one submachine gun being wielded up close and personal so that the tourists can’t miss seeing it. But at least we could see something — I couldn’t quite make out the famous door of No. 10, although I could see the famous railings in front of it (which is how I could tell that was it, and not another black door that was at a slightly more advantageous angle for viewing — perhaps the chancellor of the exchequer’s abode; I don’t know).

But, after all the talk about invasive, intrusive new TSA procedures in recent months, what we experienced was not noticeably different from any other trip I’ve taken over the last decade or so. The only hassle I remember at all was the rigmarole of having to reclaim our bags in Atlanta after getting back, and then having to recheck them for the flight to Columbia. That was highly irritating at the end of a day (actually, the worst thing was that it WASN’T yet the end of the day) when we’d already been up for 18 hours, and had just stepped off a 9-hour flight. Without that drill, we might have made our connection in spite of our flight from Heathrow having been delayed. Delta quickly got us onto another one — although our bags didn’t follow us until the next day.

But all that stuff about futuristic x-ray machines and being groped by the TSA? We didn’t encounter any of that. I was ready for it, and all prepared to shrug it off (why people get so worked up about such things I still don’t understand), but then it just … didn’t happen.

Still I can enjoy a joke as well as the next guy. So when a friend who closely follows such issues showed me the above video, I just had to share it with y’all…

Near as I can tell, this video comes courtesy of buckhowdy.com. 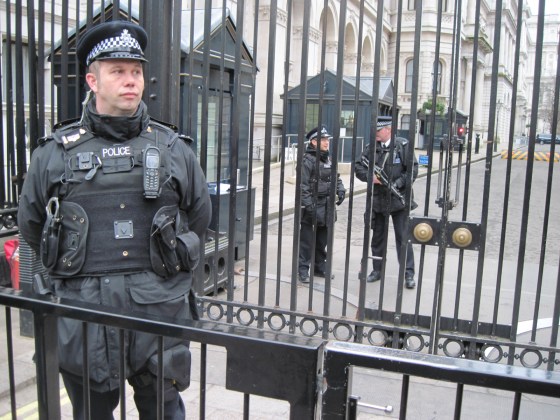 The only obviously stepped-up security I saw the whole trip was at the end of Downing Street, where it runs into Whitehall.