Dick Winters has died. “Captain Winters,” I think of him as, from the time when he commanded Easy Company of the 506th PIR, 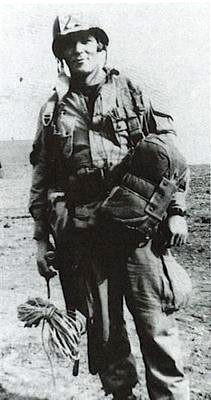 101st Airborne Division — although on D-Day, the day on which his actions should have earned the Congressional Medal of Honor, he was still a lieutenant, and by the time the company had captured Hitler’s Eagle’s Nest he was a major, and battalion commander.

Yes, the guy who was the main character in “Band of Brothers.”

He was a peaceful, modest man who, when war was thrust upon him and the rest of the world, discovered talents and personal resources that would otherwise likely have gone unsuspected. The video clips above and below, with actor Damien Lewis in the role of Winters, perfectly illustrates the qualities that Stephen Ambrose described in the book that inspired the series: Mainly, an uncanny coolness under fire, and certain, unhesitating knowledge of exactly what to do in a given situation — knowledge which he quickly and effectively communicated to his men in real time, with a minimum of fuss. The video clips show how Winters led a tiny remnant of Easy Company (of which he was only acting commander, since the CO was missing, later found to be dead) to take several well-defended, entrenched guns trained on Utah Beach — saving untold numbers of GIs — with only a couple of casualties among his own men. This was on his very first day in combat. The action is used today at West Point as an illustration of how to take a fixed position.

This guy has long been associated in my mind with the definition of the word, “hero.”

In later years, when he was interviewed in old age about the things that happened in 1944-45, you could still see the manner of man he was. His manner was that of a man you’d be confident to follow, a man you’d want to follow if you had to go to war, while at the same time being perfectly modest and soft-spoken about it. And on this link you’ll see what some of his men thought of him.

As I wrote about him last year:

Over the last few years I had occasion to visit central Pennsylvania multiple times, while my daughter was attending a ballet school up there. Almost every time I went there, I thought about going over to Hershey to try to talk to Dick Winters, the legendary commander of Easy Company of the 506th Parachute Infantry Regiment in the 101st Airborne Division during World War II. He was the leader — one of several leaders, but the one everyone remembers as the best — of the company immortalized in Stephen Ambrose’s book Band of Brothers, and the HBO series of the same name (the best series ever made for television). 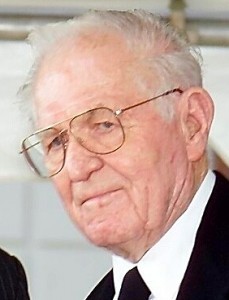 A little while ago, I was reminded of that reason. The History Channel showed a special about D-Day, and one of the narrators was Winters, speaking on camera about 60 years after the events. He spoke in that calm, understated way he’s always had about his heroics that day — he should have received the Medal of Honor for taking out those 105mm pieces aimed at Utah Beach, but an arbitrary cap of one per division had been place on them, so he “only” received the Distinguished Service Cross.

Then, he got a little choked up about what he did that night, having been up for two days, and fighting since midnight. He got down on his knees and thanked God for getting him through that day. Then he promised that, if only he could get home again, he would find a quiet place to live, and live out the rest of his life in peace.

I figure a guy who’s done what he did — that day and during the months after, through the fighting around Bastogne and beyond into Hitler’s Eagle’s Nest itself — deserved to get his wish. He should be left in peace, and not bothered by me or anyone else.

So I’ve never tried to interview him.

Well, I never did impose upon him to get that handshake, even though I’ve been to his general neighborhood again since I wrote that. And that causes me now a mixture of satisfaction and regret.

15 thoughts on “Dick Winters is gone, and I never did shake his hand…”