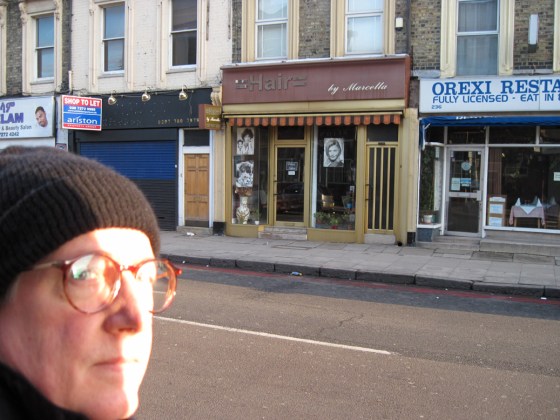 See where it says "shop to let"? And do you see any window-shoppers?

Well, I told you I would find the former site of “Championship Vinyl,” the record shop in High Fidelity, and I did. And no one (except maybe Nick Hornby) can tell me I’m wrong.

It satisfies the criteria:

I made up that last criterion, but the first three are in the book.

So, you ladies are wondering — just how patient is my wife, to go along to places like this? Well, she didn’t. This was the one thing I did 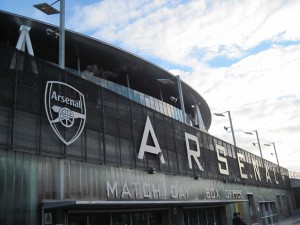 Unfortunately, the souvenir shop wasn't open. I had wanted one of those scarves...

on my own. Today was the day we were leaving London for Oxford, and she just wanted to get up and get ready. So I got up before she did, hopped the Jubilee line down to Green Park and got on the Picadilly way out to Islington, to Holloway Road, and hiked over to Seven Sisters.

Then, after “finding” Championship Vinyl (it was the first street off Seven Sisters with some actual commercial fronts off the main road) on Hornsey Road, I walked back east until I got to Arsenal Stadium, the scene of other Hornby tales. At Arsenal, at least, I wasn’t the only geek taking pictures of the stadium — but the others were English football fans. One guy was having his wife take his picture there while she tried to keep the kids in order.

After I found the Arsenal Tube station (this required asking directions four times, twice from people who did not speak English), I rode back to our stop, and left Swiss Cottage station with sadness. I really, really love the Underground. (There’s no other way I could have gone all the way to Islington in a city this crowded and done all that walking about and gotten back in less than two hours.) 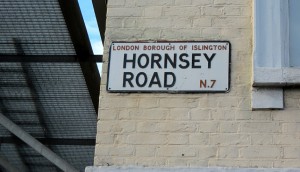 When I got back, J had packed for both of us, and we took a taxi to Victoria Coach Station for the ride to Oxford. Come to think of it, she really is enormously patient with me…

Oh, and if you wonder why I would want to do this… well, you just have to read High Fidelity. The movie was great, but the novel was much better. 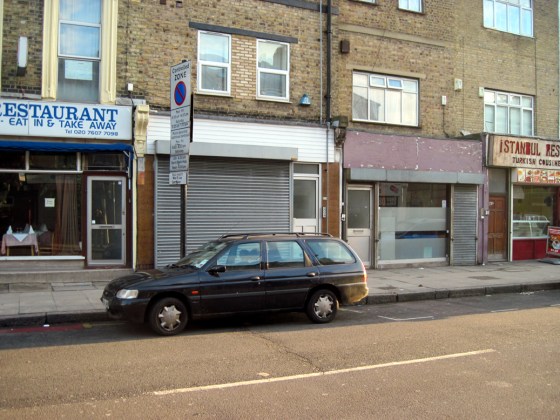 Or maybe THIS is it, a couple of doors down. I can see how experts could in good faith disagree...