This morning, when I went for a Grande Verona at the 5 Points Starbucks, I had the pleasure of flashing one of my favorite souvenirs from our trip to England: My official London Starbucks card. (Yes, it’s touristy, but I don’t care. I tend to like almost anything with a Union Jack on it.) 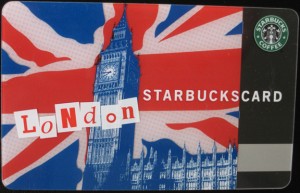 The effect was everything I could have hoped for. The barista was impressed, noting that he’d never before seen one like it. I basked in my elevated status… a Thorstein Veblen moment!

I bought it at a Starbucks in The City, one of two or three of the chain’s stores to which I gave my custom in London. The visits were generally satisfactory, which I took time to communicate to Mr. Darcy — that is to say, Darcy Willson-Rymer, the managing director of Starbucks in the UK and Ireland. He’s one of my followers on Twitter, you know — a fact which I could have mentioned to the baristas in England if I’d wanted to impress them, but one doesn’t want to top it the nob too much. Besides, it was unnecessary; the service was generally up to the usual high Starbucks standard. (Darcy was kind enough to write back to me, saying “Welcome to the UK. I hope we look after you. let me know how you get on.” I got on fine, as it happened.)

There were differences — for instance, they always ask you whether you want to drink your coffee on-premises or take away, which took me aback at first. (Or was that at the Caffe Nero shops I went to when Starbucks wasn’t handy? No, I think it was at both.) Also, some of the stores were huge, with far more seating capacity than I’m used to. Which was nice.

But now that I return home, I find all is not well in Starbucks land.

They’re changing the logo. I didn’t like the sound of that when I first saw the headline of the release a colleague had shared. Now that I’ve seen the new logo, I like it less.

How does it strike you? I think it looks naked. The poor siren is suspended in space, unanchored. She looks insecure. And now that it’s monochromatic, now that the “siren” is green and there’s no black to offset it, the whole lacks contrast, definition and character. Also, removing the words suggests a surrender to a post-literate world — and while I may have this wrong, I would have said that Starbucks’ constituency would tend to be more literate than the general population.

Moreover, it’s an unnecessary break with tradition, which on principle I abhor. (I’m not much on show tunes, but to the extent that I have a favorite, it’s “Tradition” from “Fiddler on the Roof.” The rest of the play, in which Tevye is forced to accept successively more jarring breaks with tradition, I like less.) It’s insupportable, as the original Darcy would have said. And then, when I read the reasoning — that it’s intended “to move the Seattle, Washington-based company beyond coffee” — I was nothing short of appalled. Beyond coffee? That’s like the church moving “beyond God” (which you might say some churches have done, but let’s not get off on a theological digression).

You ask me, I say if you must change, go back to the original brown logo (except that it had “and Tea,” which also distracted from the point). But, well, they didn’t ask me… 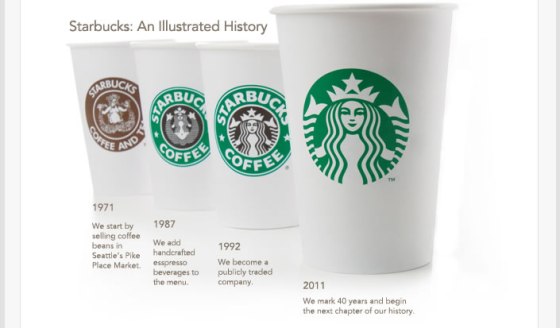 20 thoughts on “I leave the country for a few days, and look what happens”