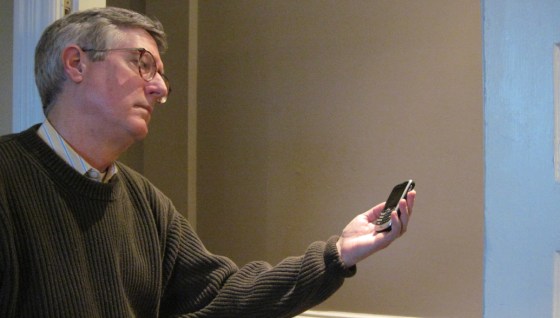 Alas! poor Blackberry. I knew it, Horatio; a device of infinite usefulness, of most excellent fancy; it hath borne me on its back a thousand times; and now, how abhorred in my imagination it is! ... Where be your emails now? your Tweets? your texts? your flashes of merriment, that were wont to set the Blogosphere on a roar?

To switch or not to switch, that is the question…

Get thee to a Verizon, go!…

Something is rotten in the state of 3G…

OK, so none of those work as well as I’d like. But the thing is, my Hamlet-like indecision caused me to miss out on the first wave of iPhones being offered by Verizon, so I will not be one of the cool kids (I’m sure this amazes you). I was thinking about making the move today, but then I see that they’re all gone. There will be more next week, but that’ll be like being the 27th man in space, instead of the first. And now that the first rush of lust for the new gadget has been disappointed… I’m wondering if I should wait a bit longer than that.

Here are the facts, which I’m sure Shakespeare could render more beautifully, but I will stick to plain prose:

What to do, what to do? I was too tired to figure it out last night. Today, I had a busy morning of meetings with clients and such. Twice during the morning, I had to reboot my device to check my email or the web. Once, it did that thing where it dies completely, and has to be force-reset. So I’m going to have to do something.

At lunch today with Lora — the most fanatical of my “iPhones are better” friends — I started blathering about my dilemma. While I was doing so, she glanced at her device and informed me that Verizon had just run out of iPhones.

So now I don’t have to think about this for awhile. Until the Blackberry dies completely, that is.

Isn’t it wonderful living in our modern age, with all these fantastic devices to make our lives easier?

18 thoughts on “Hamlet misses out on the new iPhone”