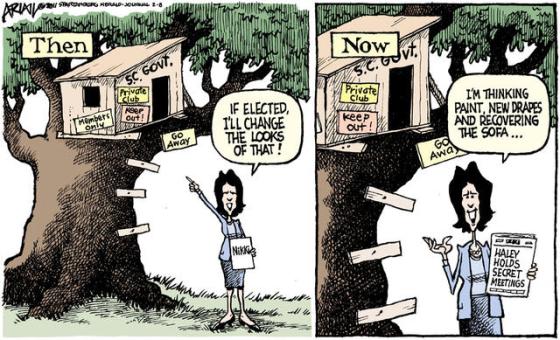 I started my career in a state with a real Sunshine Law… Tennessee.

The expectation was clear there, back in the heady post-Watergate 1970s, that the people’s business would be done in public, and that government documents belonged to the people as well.

This led to a lot of awkwardness. For instance… I well remember a school board meeting I attended in Humboldt when I was covering several rural counties for The Jackson Sun. Humboldt was the closest sizable town to Jackson, and I knew my predecessor (who was now my editor) had regularly covered that body’s meetings. Trouble was, they were regularly scheduled on the same night as several other important public bodies’ meetings in my coverage area, and for the first few months I was on that beat, they always had something going on that demanded my attention.

Mondays were brutal. There were regularly several meetings I needed to go to across two or three counties, plus other breaking news. It was not unusual for me to start work early Monday morning, work through regular day hours, cover two or three meetings that night, spend the whole night writing five or six or more stories, get some final questions answered in the morning, make calls on another breaking story or two, and then file my copy at midmorning. Actually, I had a secretary in my Trenton office who laboriously transmitted each of my stories, a character at a time, on an ancient teletype machine while I finished the next story. If I was lucky, I could grab a nap in the afternoon. But Tuesdays were often busy as well.

I think the Humboldt school board meetings were on a Monday, but perhaps my memory fails me.

Anyway, I finally managed to make it to one of their meetings — and almost felt apologetic for not having been before. I sort of hated for the good folks of Humboldt to think the Gibson County Bureau Chief didn’t think them important. I didn’t know what was on the agenda; I had just been meaning to come, and finally, here I was.

Often, when I’d show up to cover meetings in these small towns, the chair would recognize me in a gracious manner, which tended to embarrass me. I mean, I wasn’t their house guest, I was a hard-bitten newspaper reporter there to keep a jaded eye on them. Of course, this graciousness was also a handy way of the chair warning all present that there was a reporter in the room.

But at this one, it would have been nicer to be formally welcomed than to experience what happened.

It was a singularly boring meeting — I kept wanting to kick myself for having chosen THIS one to finally make an appearance. They were approving annual contracts for teachers (you know, the kind of thing reporters would be excluded from in SC, as a “personnel matter”), one at a time, and it went on and on and on. There was NOTHING at the meeting worth reporting, and as I rose to leave I was regretting the waste of time.

Then this one member comes up to me with a swagger, and I smiled and started to introduce myself, and with a tone dripping vitriol, he sneered, “Bet you’re sorry you came to this meeting. We didn’t give you any controversy for you to splash all over the paper.” I mean, I’d never met this guy, and he frickin’ HATED me for some reason I could not imagine. What the hell? I thought: I come to your stupid boring meeting, sit all the way through it, and this is the reward I get? I didn’t know what to say to the guy.

It took me a day or so to figure out that the year before, my predecessor had covered a nasty fight over a teacher’s contract — one I had either not focused on or forgotten, since that wasn’t my turf then. It had been a HUGE deal in that town, and left a lot of raw feelings — many of them caused by board members’ deep resentment of having to have personnel discussions in public. This bitter guy assumed that the only reason I had come to the meeting, when I usually didn’t, was because teacher contracts were being discussed. When, in actuality, if I’d known it, I’d have found something to do that night in another county.

All that is to say, I came up with certain expectations of openness in government. Which means I was in for a shock when I came home to South Carolina to lead the governmental affairs team at The State. Barriers everywhere. An FOI law full of exceptions. A Legislature that cherished its right to go into executive session at will. Anything but a culture of openness.

I’m afraid I was rather insufferable toward Jay Bender — the newspaper’s lawyer and advocate for press issues before the Legislature — the first time he met me back in 1987. He had come to brief editors on the improvements he had helped get in state law in the recent session. My reaction to his presentation was “WHAT? You call that an Open Meetings law? You settled for THAT?” I was like that.

And I saw it as my job to fight all that, and crack things open at every opportunity. I was sometimes a bit insufferable about it. One day, I went to the State House (I was an unusual sort of assigning editor in that I escaped from my desk into the field as often as possible) to check on things, and learned that there was a committee meeting going on somewhere that wasn’t being covered (there are a LOT of those these days). I thought it was behind a closed door leading off the lobby. I charged, ostentatiously (I was going to show these complacent folks how a real newspaper ripped aside the veil of secrecy), with a photographer in tow, and reached resolutely for the doorknob.

One of the many folks loitering in the lobby — many of whom had turned to watch my bold assault on that door — said, “There’s a meeting going on in there,” in an admonitory tone. I said, right out loud for all to hear, “I know there is. That’s why I’m going in there.”

And I threw open the door, and there were two people sitting having a quiet conversation, suddenly staring at me in considerable surprise. No meeting. No quorum of anything. I murmured something like “excuse me; I thought this was something else” and backed out — to the considerable enjoyment of the small crowd outside.

Anyway, I take a backseat to no one when it comes to championing open government, and so it is that I say that Nikki Haley should not have met with two fellow members of the Budget and Control Board without the participation or knowledge of the other two officials. Curtis Loftis was right to protest, and Nikki’s chief of staff was entirely out of line to scoff at his protest.

That said, I had to nod my head when my colleagues at The State said this about the breach:

But here’s the thing: This was a meeting, and a conversation, that we want Ms. Haley to have with Senate Finance Chairman Hugh Leatherman and House Ways and Means Chairman Dan Cooper. After what we’ve been through for the past eight years, having these three officials even on speaking terms, much less meeting to talk through our budget problems, is a breath of fresh air.

Amen. That was indeed my first reaction: Nikki’s having a heart-to-heart with some key lawmakers? Good. At least, it offers me hope.

Maybe it wasn’t kosher. OK, it wasn’t, period. Totally against the rules as I understand them. And yeah, it’s easy to characterize it as hypocritical for Ms. Transparency to do something like this. But hey, Nikki persuaded me some time ago that she wasn’t serious about transparency when applied to her. That was a huge part of my discomfort with her as a candidate, and no shock now. But… at least MAYBE she made some progress toward overcoming another serious deficit in her qualifications to lead our state — her penchant for going out of her way not to get along with the leadership.

Maybe. I don’t know; I wasn’t in the room — which brings us back to the problem with closed meetings. Which is why I oppose them. But you know, the older I get, the more certain I am that stuff like that is way more complicated than it seemed when I was a young reporter.

10 thoughts on “My uncomfortable “yeah, but…” about Nikki’s (apparently) illegal meeting”