At Rotary today, I had grabbed my food (kielbasa today, with peppers and onions, which I love) and was looking for a seat and Jack Van Loan waved me over to his table. He wanted to get my thoughts on this Wisconsin situation.

I sort of had to disappoint him. I explained about my person idiosyncrasy, about how little stock I put in Other People’s Politics (Down With O.P.P., indeed), which in this national-media saturation era (in which partisans across the country see every local controversy as another battle in the titanic war between Good and Evil — with their end of the spectrum being good, of course), we hear WAY too much about. Except that I hear less than others, because I block it out.

That is, I block out all but what I can’t help picking up through osmosis. And on this, the only thing I had picked up was that it had to do with public employee unions.

So all I could offer Jack was this:

I don’t think there should be public-employee unions. So I guess, on this issue, that sort of puts me on the side of that Walker guy. But that’s about all I know.

To me, working for the government — local, state or federal — is PUBLIC SERVICE, and you should have no loyalties except to the public. You know, like those “permanent government” civil servants in Britain, who serve as well as they can the elected officials of whichever party happens to hold power. Or, come to think of it, every employee below the political appointments in this country.

Private sector unions are one thing. I’m not crazy about them, and never wanted to belong to one. I never wanted a third party between me and my employer. (And yep, I still feel that way after being laid off — so much for those of you who think political positions inevitably arise from personal experience. Although, of course, as a vice president of the company I wouldn’t have been in the bargaining unit anyway.)

But at least in the private sector, we’re talking about people being out for themselves and trying to gain some leg up in a disproportionate power arrangement.

And to me, unionization gets in the way of that, big-time. It’s kind of an alien concept to me, as a South Carolinian. I was really taken aback when I ran across the historical plaque pictured below in Pennsylvania. Wow. A state that celebrates that. It surprised me. (I was about to make the categorical statement that we don’t HAVE public employee unions in SC, but it seems like I ran into some exceptions to that recently. I just can’t remember where. It was someplace really obvious… Dang it, I’m ALMOST sure there are no such unions here, but…)

And that’s all I’ve got to say about that. (Unless y’all provoke me into saying more.) 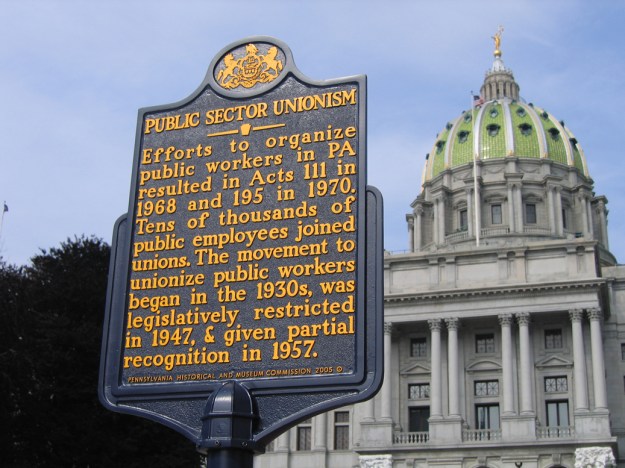 They may be right proud of public-sector unions in Pennsylvania, where I shot this, but we don’t hold with ’em down heah.

18 thoughts on “There should not BE public-employee unions”