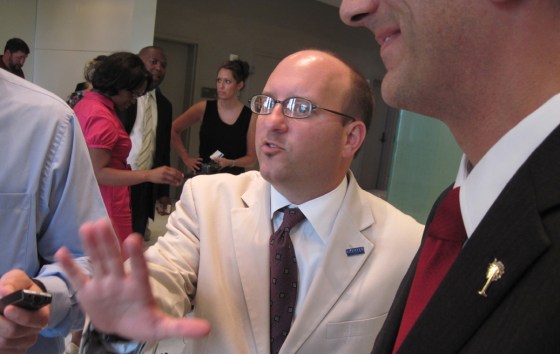 Trav Robertson, as we saw him during the 2010 campaign.

Still sort of reeling from this discombobulation called Daylight Savings, and having had three glasses of sweet tea with my lunch at Seawell’s — to no noticeably helpful effect — I decided to do a wide swing through Five Points to get some REAL caffeine at Starbucks on my way back to the office.

So I got my tall Pike, and once again impressed the baristas with my fancy gift card from across the sea (thanks, Mr. Darcy!), and on my way out ran into Trav Robertson, whom I hadn’t seen since the election. Trav, if you’ll recall, managed Vincent Sheheen’s almost, but not quite, campaign for governor last year.

We chatted for a moment, mainly about the state of news media today and how it relates to politics (he said one of the toughest things he found to adjust to in the campaign was this newfangled notion that the story changes at least four times in the course of what we once so quaintly called a “news cycle”), and we parted, and as I walked back toward my truck, who was coming up the steps from Saluda but Larry Marchant. He smiled and we shook hands, and turning back to see Trav standing at the coffee shop door, I said, “Well, here’s you, and here’s Trav Robertson — we’ve just got everybody here, Democrats and Republicans…” as I moved on toward my vehicle.

Which is a pretty stupid and meaningless thing to say, but what DOES one say in such a social situation? I mean, I’m not gonna say, “Well, lookee here, we’ve got Trav, whose candidate lost a close election to a woman you claimed to the world to have slept with, and I last saw you being made fun of by Jon Stewart….”

And really, I suppose it’s not all that cool to say it here on the blog, either, but… it seems to me there’s a social commentary in here somewhere, having to do with Moynihan’s concept of Defining Deviance Down or whatever. And when I say “deviance,” I’m not picking on Larry or anybody else, but talking about us, the people who are the consumers of such “news.”

I mean, how does one conduct himself in polite society — or any society — in which such things are discussed, disclosed, dissected and displayed publicly? Actually, “publicly” isn’t quite the word, is it? Doesn’t quite state the case. Way more intense than that.

If you’re Jon Stewart, life is simple. You make a tasteless joke or two, get your audience to laugh, and move on to the next gag. But what do you say if you’re just a regular person out here in the real world, and you run into the real people about whom these jokes are made?

Whatever the right thing is, I haven’t figured it out, so today I just fell back on the time-honored stratagem of ignoring any weirdness inherent in the situation, and saying something insipid. Which, in this polite state of ours, still works.

As for Trav and Larry — did they speak after I left? Do they even know each other? If they spoke, what did they speak about? I have no idea. I retreated to the office with my coffee. 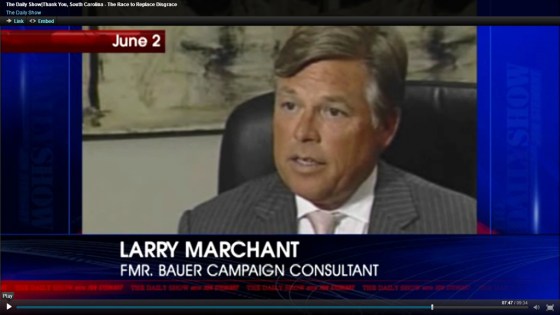 Larry Marchant, as we saw him during the 2010 campaign.

5 thoughts on “But really, what DO you say?”