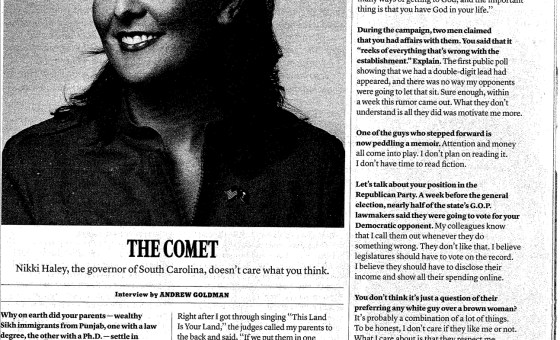 Of course, we knew that — I’ve noted it before (most recently with regard to the Darla Moore affair). But it’s interesting that any national media have noticed it, given the hagiographic coverage she usually receives outside the state.

The State took note of the New York Times Magazine article several weeks back. They saw the “Comet” headline, and noted her wildly hubristic statement that “I don’t lose.”

But they apparently missed the subhead — probably because whoever was doing The Buzz for that edition looked at the piece online, rather than in print.

And that was the best part.

Above is a shot from a PDF of the print edition, which an alert reader shared.

By the way, that little pun — Haley the Comet — reminds me of something I saw in Oxford during my recent visit.

It seems that when Edmond Halley, famous for having first charted the path of the comet, was at Oxford (The Queen’s College), he decided to knock a hole in the roof of his top-floor flat so that he could watch the stars from there. The landlord was VERY accommodating — even though he wasn’t yet the famous Halley of the Comet — and a little observatory structure was built onto the roof.

At least, that’s the way our guide on the walking tour told it. The story may be apocryphal (a few minutes on Google just now failed to confirm it).

But if it’s true, it occurs to me that Halley didn’t care what people thought, either. With him, it turned out all right in the end. With our own Haley, the Comet… that definitely remains to be seen.

Below is the picture I took on Jan. 4 of the building where Halley lived: 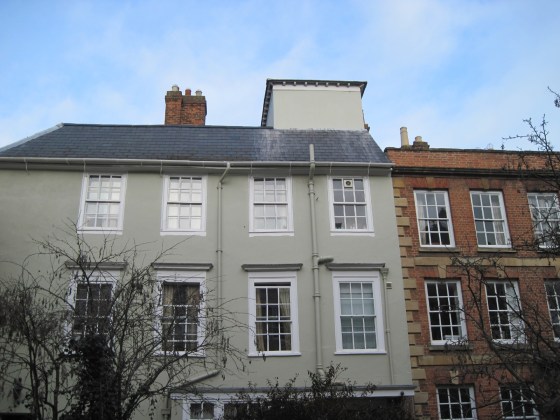 11 thoughts on “NYT Mag: “Nikki Haley, the governor of South Carolina, doesn’t care what you think.””