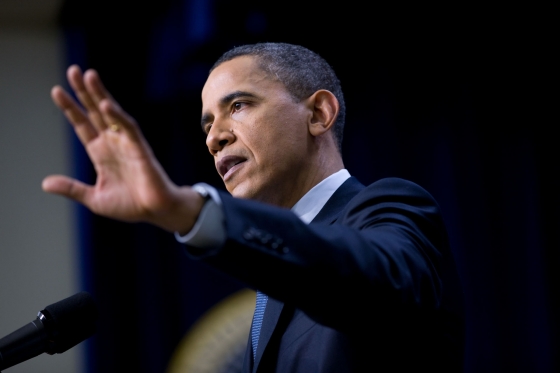 The president at this afternoon's presser. (Official White House Photo by Lawrence Jackson)

Well, gasoline prices are rising toward levels that might, just might, cause some of us to face reality and acknowledge that it’s not a good idea at all to be so desperately dependent on cheap oil from crazy-dangerous parts of the world, and what are our elected leaders — Democrats and Republicans — doing?

The GOP is busily blaming Barack “Root of All Evil” Obama. The president himself is responding by saying, at a press conference today, that he’s prepared to tap the strategic oil reserve, if needed.

But that last part is key, and his way out as a rational man. It’s like his promise to “start” withdrawing troops from Afghanistan by a certain date, which in no way commits him to draw down dangerously before it’s wise to do so. Obama’s smart; he’s not going to pander so far that he commits himself to something irresponsible. This is a quality that he has demonstrated time and again, and which has greatly reassured me ever since he beat my (slightly) preferred candidate for the presidency. This is the quality — or one of them — that made me glad to say so often, back in 2008, that for the first time in my editorial career, both major-party candidates for president were ones I felt good about (and both of whom we endorsed, in their respective primaries).

To quote from the report I just saw on the NPR site:

Obama said he’s prepared to tap the U.S. emergency oil reserve if needed. But as gas prices climbed toward $4 a gallon, the president said the U.S. must adopt a long-term strategy of conservation and domestic production to wean itself off foreign oil.

“We’ve been having this conversation for nearly four decades now. Every few years gas prices go up, politicians pull out the same political playbook, and nothing changes,” Obama said.

“I don’t want to leave this to the next president,” he said.

Some in Congress have been calling on Obama to tap the Strategic Petroleum Reserve. And the president made clear Friday that that was an option, although he indicated he wasn’t yet prepared to exercise it. He declined to specify the conditions that would trigger the step, but said it was teed up and could happen quickly if he chooses to call for it….

His threshold, based on what he said, is a Hurricane Katrina, or worse. Personally, I’d raise the bar a bit higher than that, but he’s on the right track, trying to set a high standard. (You make a disruption like Katrina the standard, then next thing you know, you’re tempted to lower it to, say, a BP oil spill — and that’s not the direction you want to go in.)

The key word here is “strategic,” a threshold that I would think wouldn’t be crossed until we have a sustained inability to GET oil to power our economy — something we came close to, in spots, in recent crises. But it seems to me one only turns to such “strategic” options as a last resort. The president should be “prepared to tap the U.S. emergency oil reserve if needed” in the same sense he is expected to be prepared to crack open the “football” and activate the codes for going nuclear. OK, maybe that’s a bit extreme, but you get where I’m going with this. It’s something we hope and pray never happens, and we do our best to pursue policies that avoid such an eventuality.

By the way, back to that excerpt above. I particularly love “the president said the U.S. must adopt a long-term strategy of conservation and domestic production to wean itself off foreign oil.” Earlier today, I disparaged the president for being no Energy Party man. (I was essentially repeating an observation I made about both him and McCain in a July 6, 2008, column.)

But maybe I was wrong. If he keeps saying things like that, he may deserve the Energy nomination in 2012 after all.

19 thoughts on “Obama: Ready To Tap Oil Reserve If Needed — which it ISN’T, not by a long shot”