First and foremost, a thing where you go online and click “yes” or “no” to a current-events question is not a POLL, in any meaningful sense. It has no statistical significance. If you don’t have a properly constructed sample, with the right elements of randomness and screening questions (“are you the head of household, etc.”), you cannot extrapolate that the result you obtain indicates what you would get if the entire population, or electorate, answered the question.

A self-selected sample doesn’t cut it, not by a long shot. It’s a great way to invite readers/viewers to sound off — they like that — but it doesn’t generally give you much, if anything, to base conclusions on.

Still… my eyebrows raised when I saw this “poll” result over at the WLTX Facebook page: 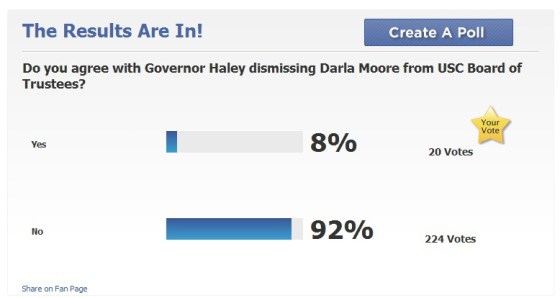 Yeah, I know — 244 respondents, which makes a self-selected survey even MORE meaningless. But it still surprised me. Because for the last few days, any time someone says “This is going to cost her,” I say they are totally wrong, that Nikki made the calculation that her base wouldn’t care (or would even applaud, being so anti-elitist), and therefore she’s fine — from her perspective (certainly not from South Carolina’s).

It’s one thing for all the folks I run into at the Capital City Club to be shocked and appalled. One expects that, and Nikki Haley couldn’t care less. But this kind of populist thing should draw out the Haley fan club. For that matter, particularly with such low participation, it would be so easy to stack (which is the biggest reason you don’t regard self-selected “polls” as serious).

This result has NO statistical significance, but it’s SO lopsided. At the very least, it indicates a lack of eagerness on the part of her peeps to jump out and defend her. (I mean, did even ardent fan Eleanor Kitzman vote?) The way they rushed to back her on the WACH-Fox thing. What happened to that default mode of “If the elites and the media say it about our gal, it’s WRONG! And we’re gonna run out and shout it!”?

By the way, for what it’s worth… the latest WLTX nonpoll asked, “Should the U.S. have used force in Libya?” So far, this is how it’s going:

Yep, a dead heat. So far. And I figured that would be a blowout on the “yes” side. Because, you know, that’s something it looked like we had some consensus on before we went in. Of course, that consensus was among elites — including leading liberals who might otherwise oppose military action — and this is far from that. But that’s the factor that I thought would help Nikki on such a “poll” — at least to even things out for her. And it didn’t.

Once again, you can throw all of this out and you will have lost nothing of value — no methodology, tiny numbers. But it DID strike me as interesting, because it was such a blowout. And that’s all it is — interesting.

So I greeted this item from Columbia Regional Business Report in much the same spirit:

Gov. Nikki Haley made a grave misstep by removing philanthropist Darla Moore from the University of South Carolina’s board of trustees, said a vast majority of the people who responded to a two-day poll on the Daily Report.

Haley had few supporters of her move with only 7.1% saying they approve of her decision to replace Moore with Lexington attorney Tommy Cofield, who financially supported Haley’s campaign.

However, 78.8% want Moore back on the board; 44.2% of the respondents said Haley needs to admit her mistake and reinstate Moore, while 34.6% said the General Assembly should rectify the situation and by electing Moore to the board.

The remaining 14.1% asked who Tommy Cofield is.

Comments were fairly consistent, with the majority saying the move was “idiotic.”…

There was no methodology mentioned, so I figured this was an informal survey. I double-checked with CRBR Publisher Bob Bouyea, and he confirmed, “Informal poll.” Of course. No one in SC media has money to run real polls on the spur of the moment these days.

But I did find some of the comments interesting. Of course, they were fairly typical of what I’ve been hearing among the business movers and shakers, which is the same circle CRBR moves in.

As I say, interesting. Thought you might find it all interesting, too.