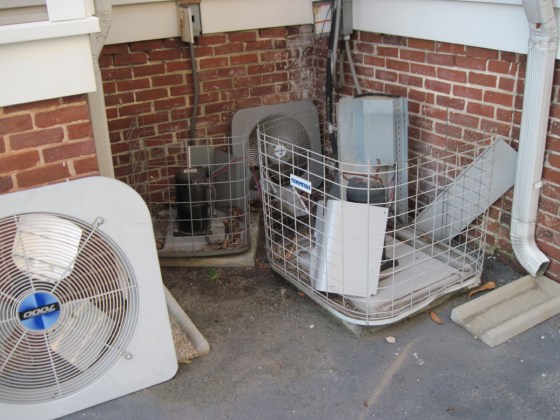 Our late, lamented AC units, right after the deed was done.

Some of y’all were disparaging The State on a previous post. Well, I’ll say this for them: They just scooped me on my own blasted story.

Of course, I let them. Remember that list of posts I’ve been MEANING to get to, which I wrote about back here? Well, one of them was about copper theft:

But it is what Bradham did next that theft-weary business and church leaders are hoping will finally slow the alarming rate of vandalism aimed at removing copper wiring – a trend that not only inconveniences victims, but also drives up their insurance rates.

Bradham bolted a lockable, customized, 350-gauge unibody steel cage over each of the units and welded the cages to the cement pads, which are secured by 12-inch anchors in the ground.

“It stops your access to the top of the unit, so you can’t get in,” said Bradham, of the newly formed Carolina Copper Protection company in Hopkins. “For the cost factor, it’s a very visual deterrence.”

That Pickens Street business was ADCO.

This is a story that goes under the heading of the Jerry Ratts dictum, “News is whatever happens to, or interests, an editor.” Or former editor, in this case. Jerry was a bit of a cynic, but he had a point. I mean, you know, this copper theft was a serious problem and all, but it only became dire quite recently, and suddenly…

Several weeks back, copper thieves destroyed both of our AC units to get a few coils of copper. We’re talking $8,000-$10,000 worth of damage for maybe, maybe $400 worth of metal.

Actually, that’s the high estimate. Back right after this happened, when I was in full fury over it, I interviewed Columbia Police Chief Randy Scott about it, and he said it was probably more like between $30 and $100. Which is… mind-boggling to me. I mean, it seems way easier to actually to out and work for that amount of money. I mean, mow a lawn or something — way less risk.

But apparently, it’s not as much trouble as I thought to tear up an AC unit that way. Chief Scott says they’re in and out in 3-5 minutes. Otherwise, he’d catch more of them.

It started with empty or abandoned commercial buildings. Now, he says, they’re hitting everything — churches, law offices, even private homes. Having your unit on a roof is no defense. Thieves destroyed 17 units from the top of the Dream Center at Bible Way Church on Atlas Road. Then, after the units were replaced, they hit again.

In fact, as Roddie Burriss reports:

In 2009, Southern Mutual wrote checks for $365,000 worth of losses due to copper thefts, according to Robert Bates, executive vice president.

In 2010, the company paid $1.2 million in copper theft losses to 174 member churches. Because most of the churches it covers are located in the Palmetto State, 109 of the 174 copper theft claims were in South Carolina, accounting for losses totaling $839,000, Bates said.

Through March 2011, Bates said the company already had paid churches $552,000 in copper loss claims, putting it well on the way to a $2 million payout for the year in these thefts…

I ran into Roddie and photographer Tim Dominick in the alley outside our building yesterday — and realizing they were doing MY story, I lapsed back into editor mode. Let the reporters and photographers do the work, then comment it. It feels natural.

So here’s the commentary part… Obviously, Something Must Be Done about this problem. Back when we were without AC, I had a suggestion, which I posted on Twitter. It was on a particularly warm day last month (I told you I’d been sitting on this for awhile):

Can’t breathe. No air-conditioning all week. Thieves stole copper. We need to bring back flogging. Or keelhauling. Something painful…

Sonny Corleone would say it’s just business, but I was taking it very, very personally. Chief Scott has a more constructive, and constitutional idea than my sweaty rantings: Make it harder to fence the stuff.

He’s backing, and testified in favor of, legislation sponsored by Rep. Todd Rutherford that would stiffen penalties (although, I’m sorry to say, no flogging), and make the businesses that buy scrap metal get legitimate ID from the people who sell them copper. Which would seem sort of like a no-brainer. As the chief said, “When you ride up on a bicycle, and you have two air-conditioning coils, you’re probably not a legitimate air-conditioning repair man.”

Chief Scott, and other law enforcement professionals, have enough problems, what with people coming at them with AK-47s. And yet they are spending more and more of their time fighting this rising tide of copper theft, and it’s pretty overwhelming — and not only to the angry, sweaty victims.

During our interview (which, like so many of my interviews, took place at the Capital City Club), the Chief looked out over the city and said, wondering, “Just LOOK at all those air-conditioners…” 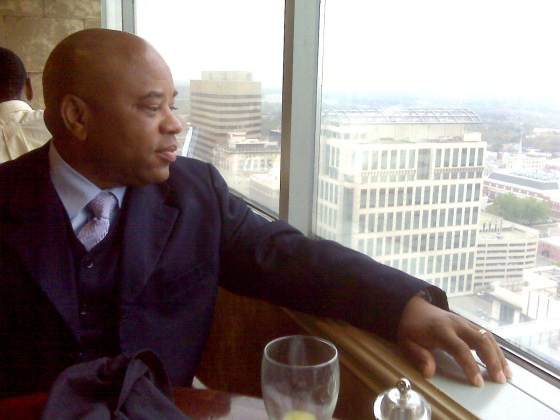