That headline sounds like the title of a college course that might be briefly popular among those trying to fulfill a requirement in history or sociology or the like, doesn’t it?

Just ran across this WashPost piece from six days ago, stepping away from emotion over the use of “Geronimo” as the name of the operation that killed Osama bin Laden, and noting the parallels between the U.S. military’s pursuits of the two men. I found it informative, so here it is. An excerpt:

The 16-month campaign was the first of nearly a dozen strategic manhunts in U.S. military history in which forces were 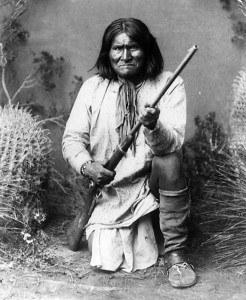 deployed abroad with the objective of killing or capturing one individual. Among those targeted were Pancho Villa, Che Guevara, Manuel Noriega and Saddam Hussein.

The original Geronimo campaign and the hunt for bin Laden share plenty of similarities. On May 3, 1886, more than a century before a $25 million reward was offered for information on bin Laden’s whereabouts, and almost 125 years to the day before the al-Qaeda leader’s death, the U.S. House of Representatives introduced a joint resolution “Authorizing the President to offer a reward of twenty-five thousand dollars for the killing or capture of Geronimo.”

In both operations, the United States deployed its most advanced technology. Whereas a vast array of satellite and airborne sensors was utilized in the search for bin Laden, Gen. Nelson Miles directed his commanders to erect heliograph stations on prominent mountain peaks, using sunlight and mirrors to transmit news of the hostiles. Neither system helped anyone actually catch sight of the man who was sought.

Small raiding forces … proved more decisive than large troop formations in both cases. In 1886, Lt. Charles Gatewood was able to approach the 40 Apache warriors still at large with a party of just five — himself, two Apache scouts, an interpreter and a mule-packer. He convinced Geronimo and the renegades to surrender on Sept. 4, with a deftness that would have been impossible with 5,000 soldiers. Similarly, the United States could never have deployed the thousands of troops necessary to block all escape routes out of Tora Bora — the deployment of 3,000 troops three months later to Afghanistan’s ShahikotValley in Operation Anaconda failed to prevent the escape of the targeted individuals from similar terrain — but a lightning strike by a few dozen commandos was successful.

Both campaigns also demonstrated the importance of human intelligence to manhunting. Gatewood was alerted to Geronimo’s location near Fronteras, Mexico, by a group of Mexican farmers tired of the threat of Apache raids, but he also needed the assistance of Apache scouts familiar with the terrain and with Geronimo’s warriors to close in on his quarry. So, too, according to administration officials, did the success in finding bin Laden depend upon the interrogation of his former confederates in al-Qaeda and upon the efforts of local agents in Pakistan to track the courier who led U.S. intelligence officers to the Abbottabad compound….

And so forth. By the way, on a related topic, here’s a piece written by a paratrooper on the history of U.S. soldier’s tradition of yelling that name when jumping out of perfectly good airplanes. Apparently, it all came from a 1939 movie starring “Chief Thundercloud,” a.k.a. Victor Daniels (not to mention the immortal Andy Devine!).

And talk about your coincidences… I had been clicking around through my Netflix instant queue one night recently and watched a few minutes of the ubersilly “Hot Shots Deux,” starring Charlie Sheen and Lloyd Bridges. (Hey, in small doses, I very much enjoy the whole “Airplane!” comedy genre — even when Leslie Nielsen is absent.) The scene below was part of what I saw. The very next morning, I first read of the controversy among some American Indians over the “Geronimo” operation… Seemed ironic. You know, what with Charlie Sheen being such a paragon of sensitivity and all.

Oh, and what do I think of it? The same thing I think about the Redskins, the Braves, et al. It’s a tribute, not a sign of disrespect. You really have to want to be insulted to take it that way. But as you know, I have little sensitivity toward — or, admittedly, understanding of — the complex resentments than can be felt by people to whom Identity Politics is important. And I hate arguing with people like that, because I’m willing to grant that in many cases such people DO actually feel hurt, with or without justification that makes sense to me. But it seemed like it would be a cop-out if, after bringing up the subject, I didn’t share my own opinion, for what little it’s worth, and however lightly I may hold it.