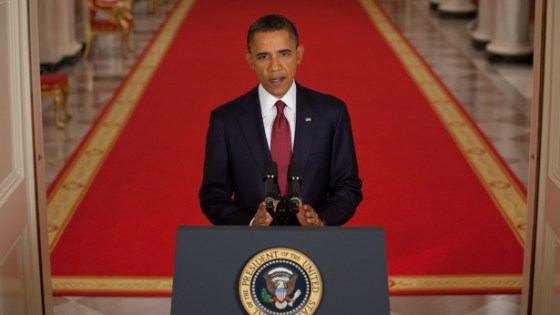 Back on the initial post about the death of bin Laden, I got into an argument with some of my liberal Democratic friends about the extent to which “credit” is due to President Obama for this development.

Don’t get me wrong — I thought the president performed superbly. I was in considerable suspense last night between the time we knew bin Laden was dead and the president’s speech, wondering how he would rise to the moment. I needn’t have worried. He met the test of this critical Leadership Moment very well indeed.

Also, he seems to have made the right calls along the way since this intel first came to light. That’s great, too.

Where I differed with my friends was in their assertion/implication that this success was due to Obama being president, as opposed to He Who Must Not Be Named Among Democrats. Which is inaccurate, and as offensive as if this had happened on Bush’s watch and the Republicans claimed it was all because we had a Republican in the White House.

ANY president in my memory (with the possible exception of Bill Clinton, who had a tendency to resist boots on the ground and go with cruise missiles, which would have been the wrong call in this case) would have made more or less the same calls on the way to yesterday’s mission, although few would have delivered the important speech last night as well. (Obama’s the best speaker to occupy the White House since JFK — some would say Ronald Reagan, but his delivery never appealed to me.)

That’s the thing — Obama, to his great credit, has generally been a responsible and pragmatic steward of national and collective security. As most people who actually get ELECTED president tend to be. The continuity that his tenure represents may frustrate some of his base, but I deeply appreciate it, and have from the start. (I first made this observation before he took office.)

But I hinted that I thought that maybe there was ONE way that they were right, although it was not for a reason they were suggesting…

Here is that one way: Obama has been far more aggressive toward going after the bad guys in Pakistan. Which I think is a good thing. I’ve always thought it was. In fact, I first wrote about that in August 2007. At the time, Obama was criticized by many — including Hillary Clinton — for this:

Democratic presidential candidate Barack Obamaissued a pointed warning yesterday to Pakistani President Pervez Musharraf, saying that as president he would be prepared to order U.S. troops into that country unilaterally if it failed to act on its own against Islamic extremists….

The muscular speech appeared aimed at inoculating him from criticism that he lacks the toughness to lead the country in a post-9/11 world, while attempting to show that an Obama presidency would herald an important shift in the United States’ approach to the world, particularly the Middle East and nearby Asian nations…

And now we see that proposed doctrine translated into reality. Actually, we’ve seen it for some time. Pakistan has gotten pretty testy with us for our across-the-border strikes, which have been far more common under Obama than under his predecessor.

On Sunday, convinced that our most prominent individual enemy was “hiding” practically in the open in a Pakistan suburb, Obama sent in the troops and got him — and didn’t bother telling the Pakistanis until it was too late for them to interfere.

For THIS he deserves great praise. But folks, that’s not the sort of things that folks in his Democratic base praise him for (aside from some nodding that he was right to say Iraq was the “wrong war” — just before they demand we get out of what Obama terms the “right war” immediately).

This was not Obama being sensitive, or multilateral, or peaceful, or diplomatic, or anything of the kind. This was Obama being a cowboy, and going after the guy in the black hat no matter where he was. This was out-Bushing Bush, to those who engage in such simplistic caricatures.

This is not a surprise to anyone who has watched Obama carefully, or even halfway carefully. But it should be a HUGE shock to the portions of his base who are still fighting the Vietnam War, the ones who backed him because they thought he was an “antiwar” candidate.

I’m reminded of Kent State. First, don’t get me wrong — the killing of those students was a horrific tragedy, that was in no way justifiable. I, too, feel chills when I hear Neil Young’s song. Shooting unarmed civilians is never excusable. I felt the full outrage of my generation when that happened. But I’ve always thought the tragedy was deepened by the fact that the protest that led to the shootings was to an extent wrong-headed.

Folks in the antiwar movement were SO angry that Nixon had pursued the enemy into Cambodia. This, to them, was a war crime of extreme proportions.

Me, I always thought it was sensible and pragmatic. You don’t let people shoot at you and then “hide” by crossing a political barrier, not unless you like having your own people killed with impunity.

Yeah, I realize there are important differences in the two situations (the most obvious being that the Cambodian incursion was on a much larger scale). But I think it’s very interesting that some of my most antiwar friends here — antiwar in the anti-Vietnam sense — are even more congratulatory toward our president than I am, when he, too “violated sovereignty” to kill Osama bin Laden. What if Nixon had sent troops to a mansion outside Phnom Penh to kill Ho Chi Minh? The antiwar movement would have freaked out — more than usual. Again, not quite the same — but you get the idea.

One of my antiwar friends recently was arguing with me that the antiwar movement has, indeed, faded away. I had said it had not. But the more I think about this, the more I think Phillip was right. I try to imagine how the antiwar left would have reacted to such a move as this 40 years ago. And yes, we have changed. Then, college students rioted in outrage. Today, they gather outside the White House and party down with American flags. Both reactions seem to me inappropriate, but I’m hard to please.

One thing does please me, however: I do approve of President Obama’s performance on this (as I do, increasingly, on many things). 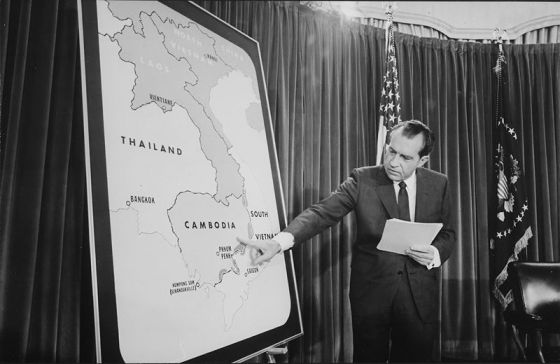 31 thoughts on “The Obama Doctrine, and the end of the Kent State Syndrome”