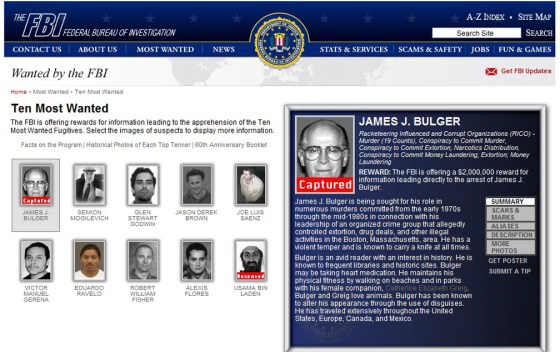 Well, that was quick. Earlier this week, I read in the WSJ that the FBI was trying something it had never tried before — a major ad campaign aimed at a Ten Most Wanted fugitive. Or rather, at his moll. Or frail. Or whatever they say now.

Fitting, given James “Whitey” Bulger’s pop-culture profile — he was the inspiration for Jack Nicholson’s character in “The Departed.”

Somebody got the bright idea — based upon the belief that Whitey’s girlfriend, Catherine Greig, was not being as reclusive as he was — of advertising where women would see it. Women who just might have seen her at the beauty parlor or something. From Tuesday’s paper:

On Tuesday, the agency will begin airing public-service announcements in 14 U.S. cities during shows such as “The Dr. Oz Show” and “The View,” focusing not on Mr. Bulger but on his girlfriend, Catherine Elizabeth Greig. Images of the couple also are featured on digital billboards in New York’s Times Square.

The FBI says the advertising campaign is the first of its kind in hunting a most-wanted figure.

The duo went underground just before Mr. Bulger’s 1995 federal indictment for his alleged role in 19 murders during the 1970s and ’80s, according to the FBI. Ms. Greig isn’t implicated in those crimes, but was indicted in 1997 for harboring Mr. Bulger….

While the FBI has sought Mr. Bulger all over the world, it says the new publicity campaign explores the possibility that clues to his whereabouts may lie with friends or co-workers of the 60-year-old Ms. Greig. The agency believes she may carry on a relatively normal routine of frequenting beauty parlors, visiting the dentist and caring for or spending time with animals.

“Have you seen this woman?” asks the 30-second TV spot…

The focus on Ms. Greig is “part of a unique initiative” aiming to reach women her age, said Special Agent Greg Comcowich, an FBI spokesman in Boston. “Our hope is that a friend, or co-worker, or someone she goes to the beauty salon with or interacts with on a daily basis will see it,” he said.

And it worked. Really, really fast.

First bin Laden, now Bolger. The feds and the military are on a roll.