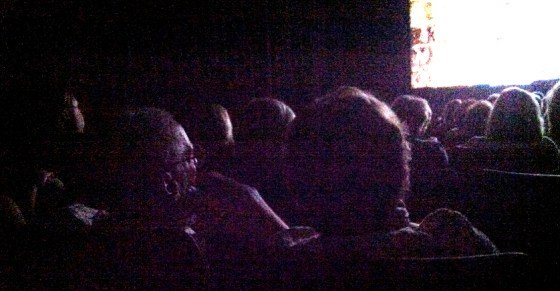 A packed house watches "Page One" at the Nickelodeon last night.

Last night, I went to see “Page One: Inside The New York Times” at the Nickelodeon. I had been asked to watch the movie, a 2010 documentary, and then stay to be a panelist for a discussion — along with Charles Bierbauer of USC and Dan Cook of the Free Times.

As I arrived, I felt a pang of guilt that yet again, I was making a public appearance and forgetting to tell you, my readers, in advance, in the remote chance you’d like to attend. But I needn’t have worried. The show was sold out. The audience included a lot of familiar faces, such as my old boss Tom McLean, who hired me at The State and was my predecessor as EPE, and the paper’s long-time attorney Jay Bender.

On the way in, I ran into Bill Rogers, head of the state Press Association. He said he was sorry he wouldn’t be able to hear me, because the show was sold out. I told him they had given me two tickets, and my wife was at a book club meeting instead, so he could be my guest. When he sat next to me at the back of the theater (I couldn’t sit at the front because of my neck thing, for which I’m going to get another shot next to my spine today), I took advantage of his slightly owing me to make a pitch: Look Bill, I see that the Press Association is offering online, multi-publication ad packages, and advocacy-ad packages as well. Why not throw come blogs in? It might add some value for the buyer, and I need somebody to sell ads for me.

In fact, one of the most meaningful lines in the film, to me, was spoken by David Carr, who was essentially the star. He’s a great character. A former crack addict, he’s now a media columnist for the NYT — a brilliant reporter, and an awesome bark-off spokesman for why a dying industry matters. (Favorite momentThe movie wasn’t so much about the Times as it was about the horrific troubles of the MSM, using the media desk of the NYT as a window on that world.

Great Carr moment: He’s interviewing the founder of Vice, and said founder is going through the usual mantra about how the MSM don’t cover the real story, so you need the gutsy, edgy fringe guys to tell you what’s really going on and Carr interrupts:

Just a sec, time out. Before you ever went there, we’ve had reporters there reporting on genocide after genocide. Just because you put on a fucking safari helmet and looked at some poop doesn’t give you the right to insult what we do. So continue.

Excuse the language, but one of the things this movie does is show the way people talk in newsrooms. And Carr was talking to a guy who pumped that up to the nth degree to show how hip and edgy he is, so Carr used his own terminology to put him in his place. By the way, here’s the story Carr wrote from that interview.

But that wasn’t his most meaningful line to me. That came when he had been researching an in-depth story about how the boorish Sam Zell had run the Chicago Tribune the rest of the way into the ground, and had done the obligatory interview with the Trib’s spokesman in which you say, Here’s what I’ve got; what’s your reaction? After the ritual comments about “hatchet job” and “I’ll get back to you,” Carr hangs up the phone. Sometime later, after communications from the Trib’s lawyers, he says,

The muscles of the institution are going to kick in at some point. It’s not up to me.

Exactly. And that’s one of the virtues of working in the MSM. There’s somebody to sell the ads, and you’re not even supposed to talk to them (usually, you don’t know them). There’s somebody else to worry about threats of legal action. You just worry about getting your story, and getting it right. And people who’ve never worked at such an institution — or even the somewhat smaller ones like it, across the country — have no idea how liberating and empowering that is.

Frequently, people ask me today whether I find I have greater freedom as a blogger than I did as editorial page editor of the state’s then-largest newspaper. That’s a really stupid question, although I don’t say that, because the asker has no way of knowing that.

Part of the stupidity of the question is based in the notion that when you work at a newspaper, “They tell you what to write.” I’m not entirely clear on who “they” are, but I suppose it’s the owners of the paper. I suppose, and I’ve heard, that when you work at a locally-owned paper where your masters are intricately tied into the community you cover, there are sacred cows, and positions you are told to take and others you are told not to take. But that doesn’t happen when you’re a part of a publicly-traded corporation. In all my years as editorial page editor, only once did anyone at corporate made even a suggestion about editorial content: Tony Ridder tried to make the case to Knight Ridder editorial page editors that the company’s papers should not endorse in presidential elections. His reasons for saying that appeared to be a) that we needed to concentrate on local issues; b) that what we said on our local levels about national politics didn’t matter; and c) that such endorsements only made about half of our readers furious at us. That last reason was, as I recall, more implied and stated; he really concentrated on reason a).

I thought that was a fine theory for a guy who lived and worked in California, but a pretty silly one for an editor in the home of the first-in-the-south primaries. For months before a primary, I had media from all over the country, and from abroad, contacting me to know what I, and we, thought about the candidates. I wasn’t going to tell our readers what we thought? How absurd. I ignored Tony’s suggestion. So did most of the other editors, to the best of my knowledge — I didn’t check, because I didn’t care what they did.

There’s another comment I used to get from people a lot, when I was at the paper. They used to commend me for my “courage” for taking a certain stand. That, too, was ridiculous. I got paid no matter what I wrote. I wasn’t taking any risk, beyond the inconvenience of maybe a source not talking to me any more. So I might as well take stands that mean something rather than write pap, right? I had that whole institution standing behind me, that warm blanket of security.

Here’s what I wrote a while back about the “liberating” effect of no longer working for the MSM:

The first casualty of unemployment is the truth.

OK, maybe not the first. First there’s the blow to one’s bank account. Then the loss of self-confidence. But truth is right up there. Especially for me. Until I was laid off in March, I was editorial page editor of South Carolina’s largest newspaper. A colleague once said to me, accusingly, “You don’t think this is the opinion page. You think it’s the truth page.” I just looked at her blankly. Of course it was the truth page.

Readers expected me to tell everything I knew, and plenty that I only thought I knew – about South Carolina’s feckless politicians (Mark Sanford, Joe Wilson – need I say more?), or whatever struck me, without reservation. And I delivered.

My reputation survives my career. Recently, a friend warned me that people feel constrained in talking to me, because their confidences might turn up on my blog. After all, bloggers tell all, right? Ask Monica Lewinsky. Ask ACORN.

As a blogger who answers to no one, I am not nearly as frank and open as I was as a newspaper editor who thought he had a secure job.

I haven’t disclosed whom I have worked for on consulting gigs since leaving the paper, because my clients haven’t been crazy about the exposure. Every word I write, I think: Might this put off a prospective employer? And I know it has, despite my caution.

There are things I have not written – pithy, witty, dead-on observations on the passing parade, I assure you – because I think, “Do you have to write that and run the risk of offending this person who MIGHT point you to a job? Can’t you just write about something else?”

And where am I applying for jobs? Well, I’m not going to tell YOU, am I?

People used to praise me for my courage for taking on powerful people at the paper. But I was taking no risk whatsoever. As long as I was supported by advertising, a transaction I was ethically barred from even thinking about, I had impunity.

But an unaligned blogger still trying to function as a journalist stands naked and alone, and is not nearly as free and honest as he was writing from the once-impregnable citadel of an editorial page. At least, this one isn’t. Keep that in mind, citizen, as newspapers fall around you.

Watching that movie launched me on many different streams of thought; I could have talked about them all night. What I just told you describes part of my reaction to a single line. As Tom McLean said after one long-winded response I gave as a panelist, I always needed an editor.