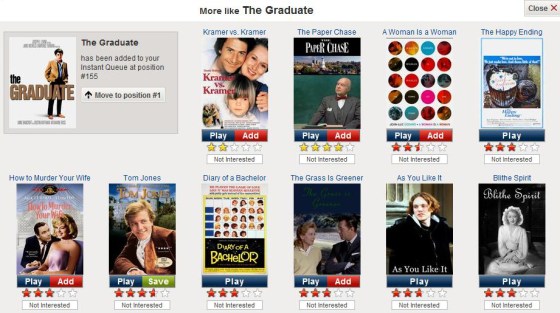 I’ve always been aware, on a superficial, untested level, that “The Graduate” stood in a league of its own, defying characterization.

I suppose you could call it a sort of dark comedy, if you like, or social satire, or whatever. But try to think of another movie that makes you think and feel anything like what “The Graduate” does. You can’t.

I had empirical confirmation of that tonight. I saw it among the “Watch Instantly” flicks on Netflix. I didn’t need it in my queue because I have it on DVD, but I clicked on it to put it in my queue just to see how the algorithms of Netflix dealt with it.

And as I suspected, it could not come up with movies like “The Graduate.” Look at the lame attempt above. “Kramer vs. Kramer?” “The Paper Chase?” Both fine films, but neither of them anything like “The Graduate.” Aside from the incidental presence of Dustin Hoffman in one of them, which is meaningless.

And please, do not mention the execrable, silly “Tom Jones” in the same conversation.

Netflix is far from infallible. But it generally does a better job than this. Take another quirky film, “The Usual Suspects.” A challenge, yes?

OK, there’s nothing exactly like it maybe, but some of these selections — “Memento,” “Blue Velvet,” a Hitchcock or two — at least get its range, landing in a loose pattern around it. I’d throw some of these out, though (“Eight Men Out?” Fine film, but doesn’t fit here), and throw in a Tarantino, or “The Professional.” None score a direct hit. But they come a lot closer than anything does to “The Graduate.” 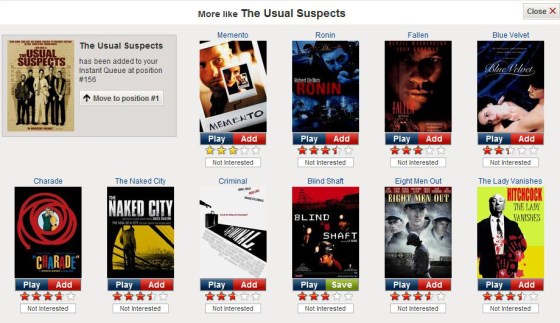 13 thoughts on “Empirical proof: Nothing comes anywhere close to “The Graduate””