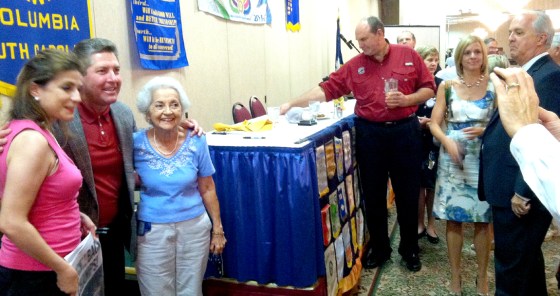 As president-elect of the Columbia Rotary Club, car dealer J.T. Gandolfo is responsible for lining up speakers for the club this year. And he is going all-out to make them the kinds of speakers who get everybody talking. So far we’ve had Nikki Haley, and the guy from FN, and Trey Gowdy. Next week, it’s Lindsey Graham, and the week after will be Jim DeMint.

But the biggest crowd so far was today, for Ray Tanner, coach of the back-to-back National Champion Gamecocks. We had to add tables, which has not happened in awhile. Someone remarked that there seemed to be more guests than members.

It’s interesting to watch how a crowd reacts to a guy who has had remarkable success in the sports arena. First, he got a standing ovation before he opened his mouth. That’s not unique — so did Leon Lott (it even happened to me once, but I had to get fired first) — but it’s rare.

Then, after extremely brief remarks — which were very well received, with enthusiastic laughter at anything that seemed remotely to have ambitions of being a joke (which made me jealous, I confess) — he went to Q&A with 38 minutes left in the hour-long meeting. Since the main speaker is the last thing on the agenda at Rotary, expected to fill out the rest of the time, that would seem a risky move. With another speaker, the questions could peter out. No chance of that here. The crowd would have asked him questions all day if allowed to.

And the questions were not of the sort that politicians get. There was no challenge in them, but rather a laudatory celebration in every word from the floor. It was like he’s an oracle, and everyone wants to be favored with his magic.

To Coach Tanner’s great credit, while I’m sure he gets it a lot, he doesn’t let this stuff go to his head. He gives the fans what they want, sharing anecdotes that feel like the inside dope, complete with self-deprecating remarks that everyone can chuckle at. He stays a regular guy, which is no mean feat considering the way the fans look at him.

The media was much in evidence, and Andy Shain from The State was Tweeting. A sample that illustrates what I said above:

Ray Tanner: C Robert Beary’s backhanded catch was his most memorable play of ’11 CWS. ‘I’d like to tell you that was coaching.’

That was typical of his perfect mix of inside perspective on cherished memories coupled with joshing humility. And it works because it’s genuine.

I doubt the club will be quite as charmed by Sen. Graham, but I’ll let you know how it goes…