CHARLESTON — As Gov. Rick Perry of Texas was still talking to the 2011 RedState Gathering at the Francis Marion Hotel today, I sent out this Tweet from the sweaty, charged-up ballroom:

I’ll go out on a limb here, even as he announces, and say Rick Perry WILL be the Republican nominee. But he won’t be president…

And an hour later, somewhat cooled off, I stand by it. Sure, I could be wrong, but if I can’t get at least one overbold statement out of driving down here and stumping around in this steamroom of a town (the only room in the hotel where the A/C seemed to be working was another ballroom where they were having an event called “GOP Leaders Meeting.” After all the leaders were let in, they allowed anyone else who wanted to come in, except for one demographic group: the press.)

So basically, y’all can quit worrying about all this, and pay attention to more fun stuff. I told Tim Smith of The Greenville News (the cowboy hat guy) about my realizations right after the speech, and I could tell he was relieved just knowing what was going to happen. Strangely, he did not close his notebook and head home to enjoy his weekend. He started interviewing RedStaters as though it mattered, as though it weren’t all over. I guess he figured, as long as he had come this far…

Then again, maybe he was hedging his bets, because I could be wrong (I hope that doesn’t shock you). Perhaps I should amend my statement, and say Rick Perry will be the GOP nominee IF every day of the campaign is like today. Yeah, that’s the ticket…

I guess it was fitting that it was so sweaty in that hotel, given all the bottled-up passion. And it was, literally — every SC GOP politician I ran into and shook hands with had sweaty palms. They, unlike the RedState conventioneers, were in full uniform: dark suit, red tie, white shirt. I, who would normally dress that way, did not today. I wore an open-necked shirt, my ragged-cuffed brown chinos, and my cheap sandals from Walmart. And inspired by Trey Gowdy, I did not shave today. Of course, this was Saturday, and I wasn’t speaking to the state’s largest Rotary, but still… he was my role model.

Anyway, back to Rick Perry, even though, as I said, there’s no point talking about it because it’s all over. Why do I think he’s going to be the nominee? Well, here are some of the reasons:

The way he pulled off this free-media coup. Remember the front-page advance story in The State yesterday? Well, there was also a front-page story in the WSJ today, in advance, about this thing that hadn’t happened yet, and written as though this speech in South Carolina was to be the 9/11 of political events, the event That Changes Everything. Based on the play of similar stories last night on the websites of the WashPost and the NYT, I’m guessing those, too, were on their respective fronts (those of you who have seen dead-tree versions of those today can confirm or deny).

He did this in the face of THE biggest event of the GOP nomination contest thus far. You may not have noticed (none of the media here was noticing), but the Iowa Straw Poll was held today. Perry was not on the ballot. And it seemed clear by the way media were treating this event that that didn’t matter a bit. THIS was the event. Forget those other guys and gal. As the WSJ put it today:

Everything about the Perry launch is designed to poke a finger in the eyes of the other candidates. His Saturday speech comes on the same day as a closely watched GOP straw poll in Ames, Iowa, the campaign’s most notable set-piece so far. His name won’t be on that ballot, and his speech seems designed to steal thunder from the event.

His entry is already stirring widespread excitement in elite GOP circles. Many predict he could pick up the backing of an array of top GOP governors, including the influential Haley Barbour of Mississippi, a major fund-raiser in his own right.

And Mr. Perry may already be benefiting from a lack of enthusiasm for other candidates, as polls show that none has garnered support from even a quarter of the GOP electorate. Mr. Romney’s Massachusetts health-care law, Rep. Michele Bachman’s relative inexperience and Tim Pawlenty’s inability to catch fire appear to have left the door open for a new candidate…

How successful was this stunt in pulling free media? Well, you can see the media mob scene. You might say, well, you’ve seen ’em that big before. So have I, but not that often, outside of a national convention. And I asked conference publicist Soren Dayton, just before Perry spoke, for his perspective on it. He said that at last year’s RedState conference, in Austin (with Gov. Perry in attendance), he had “zero” media to deal with. Today, he had 120 of the unruly creatures.

But the press can show up and do all the front-page stories about the Perry juggernaut (before it even starts rolling) all they want. That doesn’t nominate presidential candidates, does it? Well, the thing is, Perry showed up and met expectations — not only of the ink-stained wretches, but of the salt-of-the-earth (just ask ’em; they’ll tell ya) folk who show up at a conference like this one. And they had turned out en masse as well. Dayton estimated the crowd in that room about about 750, and there was a spillover room. I found myself wondering whether it was any cooler there…

It was not cool where we were, I can assure you. Aside from the humidity, Perry was on and hot and the crowd was hot, too (over that Obama, of course). And Perry, bringing all the talents of a bareknuckle Texas politico and a wannabe televangelist, threw them all the certified USDA RedMeat this RedState crowd could inhale. And they feasted on it. Watch the video. It doesn’t capture the sound fully, or the atmosphere (especially the humidity), but you’ll get an idea about how easily he spotted all their political erogenous zones and stroked them mercilessly.

He used every cliche in the book, and the tone of the response clearly said that this folks had never heard anything like it! They had waited their whole lives to hear a candidate — to hear anyone! — say these things! Such insights! He was their hero. Afterwards, I didn’t interview anyone for their reactions, because I had heard their true, spontaneous, visceral response. It wasn’t the most intense crowd response I’ve ever heard — I’ve visited black churches. It was more like the feel of the Sarah Palin-Nikki Haley rally last year, turned up several notches. (And of course, many of the same things were said — only in a more masculine manner.) I only recorded two reactions from individuals. As I was leaving the room, a woman behind me said, “I got chills!” A moment later, a man said, “He’s very direct.” Who could argue?

With this crowd (and this crowd was a great litmus test for the nomination — but not for election), he came across more clearly than any other Republican running this cycle as the AntiObama. And that’s the key, right? Because we all know where the emotional center of this passion lies.

At one point during the speech, I posted back-to-back Tweets that may have seemed to contradict each other. First, I wrote, “It astounds me that a crowd like this so wildly applauds assertions that are… obvious… things everyone knows, that OBAMA believes…” Then, I said, “Perry definitely positioning himself, more clearly than anyone, as the hyper-aggressive anti-Obama.”

What I meant was that whether he was saying things that everyone knows and believes, painfully obvious things (such as pointing out that every tax dollar had to be earned first by the sweat of an American taxpayer, which this crowd greeted like it was the most fresh, original and profound thing they had ever heard), or mischaracterizing what that wicked Obama and his minions believe in order to define what he (and everyone in the crowd!) opposed so passionately, it was all about saying that he, Rick Perry, was the one who believed, with the greatest purity and passion, all the right and good things that true Americans believed, and the one guy with the know-how, strength and determination to undo all the foolish evil associated with “Washington, D.C.” in general and Barack Obama in particular.

Some examples that illustrate what I was trying to say in that run-on sentence just now (most or all are on the video above, and most or all were applause lines):

If you want to hear the whole thing, here is my audio.

Again, I could (theoretically) be wrong in my predictions. This guy hasn’t been tested in the bigs (although there’s no bigger farm team than Texas) beyond this one speech. We’ll see. But right now, I expect this is the guy the GOP will be nominating at their convention about this time next year. 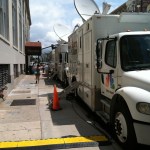 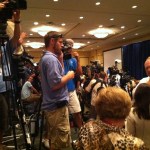 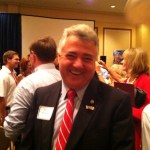 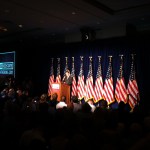 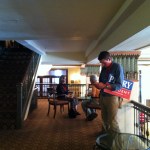 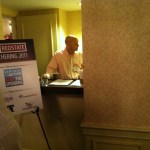 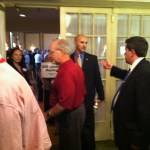 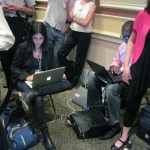 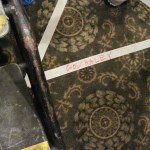 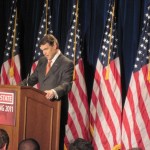 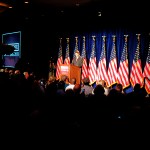 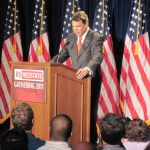 32 thoughts on “Rick Perry will be the GOP nominee (if, you know, every day is like today)”