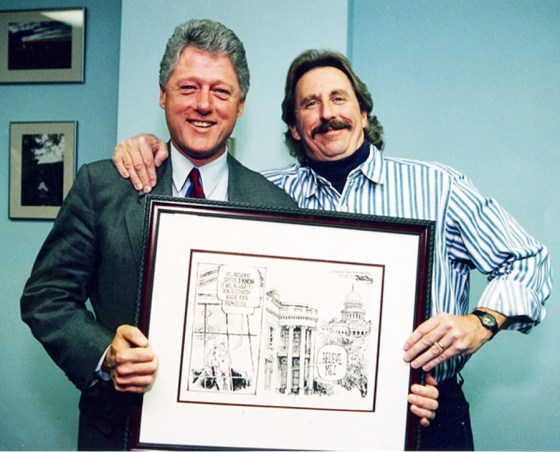 Occasionally, I have reason to open one of the many boxes containing the roomfuls of files I brought home from The State when I left (in my last two weeks, there was barely time to load it up, and practically no time to go through it, although I did throw out a few things), and sometimes I post one of the finds here.

Looks like cartoonist Bill Day, formerly of The Commercial Appeal, has been doing something similar. He sent me this picture today, taken in the mid-90s, with this commentary:

I thought you might enjoy this photo. This was at the Detroit Free Press. He was a great sport posing and loved talking about cartooning. His staff told me that he was looking forward to talking to me because he’s a big fan. About a month later I received a White House photo of him showing it to everyone in the Oval Office. He signed it: ”To Bill Day, Thanks for the laughs!  Bill Clinton”

Bill’s the kind of cartoonist who would get a kick out of meeting Clinton. Robert Ariail is more of a Bush guy — although Robert had so much fun with Clinton when he was in office (Clinton was a large part of his inspiration both times Robert was a Pulitzer finalist, if I recall correctly) that he would have enjoyed meeting him, too — to thank him for providing so much fodder.

That reminds me of a picture I need to show you that involved Bush — and Tony Blair. I’ll try to track it down tonight or over the weekend.