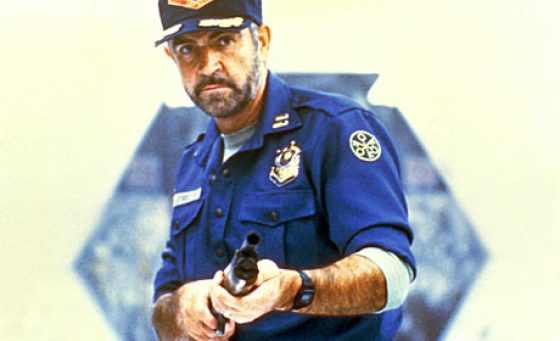 I'm picturing sawed-off shotguns -- but no federal marshals like Sean Connery to stop you from using them as you like!

Bart had to know he was going to set me off on a laugh-fest when he shared this:

Pay Pal founder and early Facebook investor Peter Thiel has given $1.25 million to an initiative to create floating libertarian countries in international waters, according to a profile of the billionaire in Details magazine.

Thiel has been a big backer of the Seasteading Institute, which seeks to build sovereign nations on oil rig-like platforms to occupy waters beyond the reach of law-of-the-sea treaties. The idea is for these countries to start from scratch–free from the laws, regulations, and moral codes of any existing place. Details says the experiment would be “a kind of floating petri dish for implementing policies that libertarians, stymied by indifference at the voting booths, have been unable to advance: no welfare, looser building codes, no minimum wage, and few restrictions on weapons.”

the part that really cracked me up about this particular libertarian fantasy is where they envision “looser building codes.”

You’re going to be living on, essentially, an oil platform — an extremely physically limited space — in the middle of the ocean? You’d better have the strictest building codes in the history of the world. In fact, while you’ve got me going — “building”? Really? You’re saying that these Überflakes would be able to take it into their heads to build new structures, according to the whims of each Ayn Randian individual, in a shared space that exists on the oceanic equivalent of the head of a pin?!?!?

For the engineering even to be feasible, you’d have to design the whole sovereign city-state all in advance, on shore. I’m talking physics here, not political philosophy. Sure, you could allow for expansion, but only within the context of the original design, or the whole thing would become untenable. A desert island, maybe — if it’s really huge, so these cranky individualists can spread out and not get on each others’ nerves. But on one of these tiny things? Really? You mean, somebody thought about this for more than five seconds, and is still considering it? And this guy gave them a million and a quarter?

But yeah, let’s roll with this! Go ahead and eliminate building restrictions entirely! Stick planks out over the edge like on a pirate ship and put condominiums on them! Who’s to stop you?

Combine that with the “few restrictions on weapons,” and these few individuals should be able to make a lot of money in the Reality TV market by putting cameras in every nook and cranny (if they can suppress their strong libertarian prejudices against such things — which I think they could for enough moolah, which libertarians crave). As entertainment, it would rival anything the Roman Colosseum ever dreamed up. And it would be perfectly legal! No one could say thee nay?

Imagine it, those of you who have actually been paying attention to the way humans behave in reality. Surely we’ve all encountered the phenomenon of neighbors suing each other over minor infractions of the neighborhood covenant. The ill will gets to bad that people move away from their dream homes. Imagine the tensions in this super-tight space — no rolling lawns to act as a buffer — with “looser building codes” and everyone packing an arsenal!

Sawed-off shotguns. That would be my weapon of choice in such tight quarters.

Anybody ever see “Outland,” with Sean Connery? It’s “High Noon” transferred to a mining colony on one of the moons of Jupiter. No ray guns, but sawed-off shotguns. (That was the touch that made the movie.) Awesome.

That’s what a Seastead would be like, as envisioned. Only without the federal marshal, which was Sean Connery’s role (and don’t ask me how a Scot got to be a federal marshal — it’s the future!). I suspect Thiel knew all this when he gave them the money. It’s pocket change to him, and maybe he thinks it would be fun to watch.