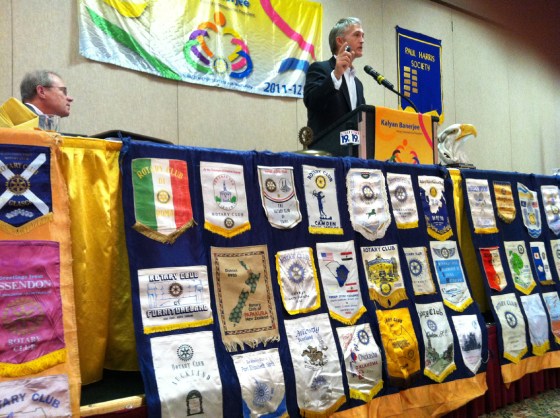 On the whole, it was good. He was well-received. Probably more so than Nikki Haley was a few weeks back, and she did pretty well also.

He certainly struck me — and to a much greater extent seemed to strike others — as a far, far more reasonable guy than the one who ran to the far right of Bob Inglis and eviscerated him in last year’s primary. It’s hard to explain to you why that was such a big deal unless you already understand. I had enough trouble finding time to write this post without taking time to go over the last 19 years.

But briefly: Bob Inglis shocked political observers across the state when he came out of nowhere to beat the Democratic incumbent in 1992. Scribes had to make excuses to their editors for why they hadn’t seen it coming. A favorite that I heard was “He cheated. He didn’t run a conventional campaign. He ran underground, through the churches.” Inglis was the prototype of two separate waves of revolution on the right that didn’t fully break until two years later. He was a new-wave religious conservative two years before David Beasley shocked the Republican establishment with the rise of that faction. (And boy, did the country club crowd sneer at the Bible-thumpers at the time!) But more to the point, he came along two years before the Class of 1994, and showed us a kind of fiscal conservatism that was not only rare, but unprecedented.

I had thought he was just another rhetorical fiscal conservative until, shortly after being elected, he did something I’d never seen one of them do: He voted against federal highway money for South Carolina, for his own constituents. Whoa, I thought. This guy’s actually for real. He continued in that vein. He term-limited himself after three terms. Then, after failing to beat Fritz Hollings (who called Inglis a “goddamn skunk”), he sat out for a bit and then came back. He came back as the same unique sort of conservative he’d always been. Inglis had always acted out of his own beliefs and conclusions, not because he was taking orders from any party or movement.

And that was his undoing. He always asked himself what was right, rather than what a faction demanded of him. And so it was that he favored a carbon tax. And voted (wrongly, but I respect his conscience on the matter) against the Iraq Surge. And was one of only seven Republicans to vote to reprove Joe Wilson for his outburst.

And for that Trey Gowdy crushed him in the primary last year. So I was very curious to see the kind of guy who could run that way to the right of Bob Inglis (from the Gowdy campaign website: “Inglis the Most Liberal Congressman of SC Republicans”), of all people — the guy with the 93.5% lifetime rating from the American Conservative Union. What kind of guy could accuse Bob Inglis of “hypocrisy” for chastising Joe? 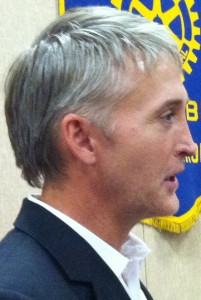 The new look for Congress.

The Trey Gowdy I saw Monday is an interesting guy on a number of levels. I had never seen him before, and my eye ran right over him at first, as someone who could not be our speaker. For instance, he apparently does not own a comb. He appeared before the largest Rotary in the state without a tie, and with his hair looking the way mine looks only on Saturdays if I don’t take a shower first thing — not only disheveled, but matted from the pillow. (Others tell me it always looks like that, and evidence seems to support them.) If I go out like that, I wear a hat. He also evoked Saturday by the fact that he had not shaved that day. I kept thinking that was an optical illusion, that the light was just glinting off his chin in a funny way — until I saw him up close, and knew for sure that he had not shaved that day, if the day before.

He was going all-out to show that he was a different kind of congressman. Old-school Joe Wilson was there, and I tried to imagine him showing up to speak even to the smallest Rotary in the state in such a state of disarray. Impossible. Joe might get wild and crazy for two seconds once a career, but that’s about it. He’s a grownup, and Daddy shaves on weekdays.

So immediately, without saying a word, Mr. Gowdy projects: Not what you expected to see.

And then he shifts and does the conventional thing: He makes a number of disarming remarks to begin, such as praising Joe for being the father of four sons who have served in uniform, and saying things such as this: “I will promise each of you, you will disagree with at least one thing I say today. Some of you with everything that I say today. And that is absolutely fantastic.” That made some Rotarians chuckle with appreciation, but I wasn’t laughing. I knew this was a guy who needed to say things like that, because of how he got here.

And he said them, and he said them well. He ably presented the indisputable facts about the spending hole we’re in in this country — and to his credit presented them not as challenges to those horrible people on the other side of the aisle, but as things that everyone, left and right, stipulated as fact. To give you the benefit of his Powerpoint presentation, I got it from his staffer who was there. She had a bit of trouble emailing it, and broke it into three parts: this one, and then this one, and then this one. I hope you can view the slides. It’s hard for me to tell since I don’t have that application on this machine — except for a viewer, which may not work the same as the full software.

OK, point taken. And appreciated. I found little to dispute in what he said. And that was actually one of the main points he strove to make on Monday: That there really isn’t as much disagreement as you might think. It was good to hear.

All of which makes you wonder why, from afar, it seems no one can agree on anything. And there’s the rub. Mr. Gowdy stayed away from the kind of stuff that might have helped explain that — the kind of stuff that got him elected (that is, got him nominated, which where he lives is the same as elected), or that drew such national attention to the “SC5.”

And as it happened, my mind started to focus on those gaps. Several times in his speech or in answering questions, he would say something ingratiating and charming, something that was engaging and charming because it left certain pertinent details out. Here are a few examples:

There were other things that, in the kind of editorial board meetings I was accustomed to in my previous life, would have caused me to say, “Wait a minute,” and seek an explanation. (And, I suspect, Mr. Gowdy would have been able to provide satisfactory ones in some cases.) But the Rotarians Monday were not raising such objections. Listeners to speeches seldom do. Most people want to like the guy in front of them, especially when he puts himself out to be liked. And they liked Trey Gowdy. Two Rotarians thanked him for giving it to them straight, “without political spin.”

I liked him, too. But sometime I want to sit down with him and dig into a few of those omissions.