People who reach conclusions rapidly, intuitively — the way I do — may have confidence in their conclusions. Which I generally do, because when the conclusions are testable, I’m wrong seldom enough that my confidence is preserved. But I know this faculty is (like all decision-making processes) fallible, and there is a certain insecurity caused by the perceptions of others, particularly the concrete thinkers, the materialists, the folks who test as an S on the Myers Briggs scale, as opposed to my extreme N. The people who view holistic, Gestalten perception with utter contempt.

This habit of thought is extremely useful in arriving at opinions on complex, controversial issues in time to write about them on deadline. It’s why I was extremely adept at being an editorial page editor, if at nothing else (something that didn’t matter in the end, since it all came down to money). Not only for the purposes of writing opinions myself, but (much more to the point, since I was the editor) for guiding the board quickly to a conclusion. We’d be arguing, and then I would say something that paid due consideration to everyone’s seemingly disparate views, but which was coherent and followed logically and made all the people who had been arguing nod and say Yes, that’s our position.

It sounds like I’m bragging about how brilliant I am, but not really. (In  fact, to doubters I’m confessing what an idiot I am.) Frankly, I suspect most people look at me and wonder whether I’m good at anything. Well, I am, and that’s the thing. The one thing that seems to impress people most when they witness it, and when they are disposed to be impressed. The rest of the time, I think they’re more inclined to wonder who let the incompetent doofus into the room.

Conveniently, it’s a talent that also occasionally comes in handy working as a Mad Man. Much of what we do at ADCO still bewilders me, but when it comes time to sum up a message that the client has been struggling to express, I am able to contribute.

This works great, when people are impressed — such as yesterday, when a client called some modest flicker of insight of mine “brilliant.” (Which it wasn’t — I later looked at it written and there was a glaring grammatical error in what I’d said. But fixable.)

It’s more of a problem when people don’t think I’m brilliant — in fact, quite the opposite — and challenge my conclusions. You know, the way Bud and Doug always do. With those guys, I get frustrated because most of my firm assertions cannot be supported by a mathematical proof that will satisfy them, so they conclude that I’m just making it all up or something. And they assert it with sufficient vehemence — being as confident in their conclusions as I am in mine — that sometimes, like a dust mote drifting into a gleaming clean room, a tiny bit of doubt surfaces in my own mind: If I’m so right, why can’t I prove it to everyone’s satisfaction? Which I knew I couldn’t do, even before meeting Bud and Doug. Anyone who thinks his beliefs are self-evident to all (however he arrives at them) will be quickly disabused by even a short stint as editorial page editor. (Yes, Virginia, before blogs and Twitter and email there was the telephone, and snail mail, and running into detractors at social occasions. All designed to take you down a notch.)

So, I find it reassuring to read something like this, in an article in Slate about the uncertainties entertained by identical twins about whether they are identical:

As science looked for more cost-effective ways to divine zygotic history, blood tests and other lab work gave way to surveys that combined objective measurements—height, weight, tone of voice, etc.—with questions about how the pairs were perceived. Were they confused for each other by teachers and friends? Parents? Strangers? But even that proved more in-depth than necessary. In a 1961 study by a Swedish scientist named Rune Cederlof, the whole exam hinged upon a single, probing question: “When growing up, were you and your twin ‘as like as two peas’ or of ordinary family likeness only?”

It turned out that whether twins thought they’d been “as like as two peas” could predict the results of every other available test with surprising accuracy. Cederlof found that the twins’ answers to this one item on the questionnaire matched overwhelmingly with five independent measures of blood type. After nearly 100 years, our finest scientists realized that discerning a man’s zygotic origin was about as easy as discerning whether he was ill by asking if he had a runny nose.

The examination of DNA, then, may be an entirely superfluous reassurance: like searching for witnesses to a murder when the act itself was caught on tape.

By the way, you may enjoy taking the quiz at the bottom of the first installment of that article. It will cause you to be skeptical about  your own skepticism. (Oops. Maybe I should have said “spoiler alert” first…) 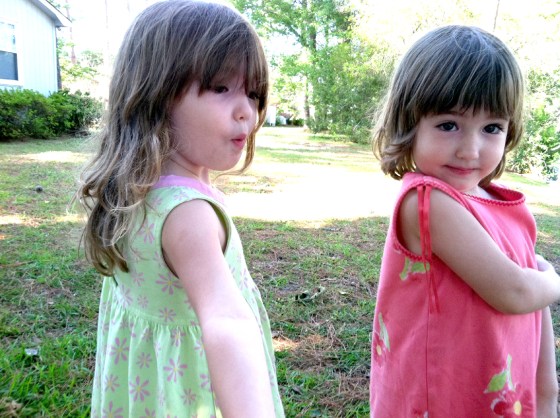 I continue to believe Twin B and Twin A are identical, despite their pronounced differences. Such as the contrasting ways they habitually pose for pictures (one makes faces; the other instinctively goes for glamour). Don't be fooled by the fact that one has shorter hair.

19 thoughts on “You know what you know, you know?”