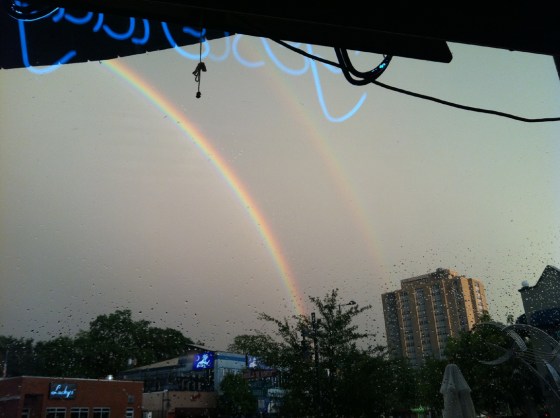 Above you see the rather startling double rainbow over Columbia last evening, shot through one of the front windows of Yesterday’s. Below you see the more earthbound view from several moments earlier.

The gray Jetta across the river — I mean, street — belongs to my daughter-in-law. I had invited her and my son and youngest granddaughter to Five Points for dinner last night. As we were eating, we were aware of how hard the rain was falling outside. Then, we noticed a crowd gathering to look out the the window. Was there a fire?

I went to check, and got the pictures. And yes, their car was flooded. Which makes me feel pretty bad, since if I hadn’t asked them out, their car would have been high and dry in their driveway.

We had to take them home — the parking lot was high enough to be out of the floodwaters, and that’s where my Buick was. Then we had to bring my son back for the bailing. The car started, but it’s saturated.

As you’ll recall, this is the second time in three days that a car belonging to a member of my family has been drenched by the chronic floods of Columbia. (My wife’s car started after the flood receded, but there’s still water squelching under the carpet, and it started to smell over the weekend. We kept trying to sop up the water and air it out, but it kept raining.)

My eldest daughter (unlike me, a Columbia resident) said last night, “I’m not someone who normally says this, but what am I paying taxes for?”

Indeed. I saw Cameron Runyan this morning and advised him, “Here’s a city issue for you.”

This is totally unacceptable. As we were leaving, we saw the business owners fighting the water in their shops. Shoes were floating around in a shoe store. Lights were on everywhere on this Sunday night.

Five Points is a gem for Columbia. But it’s kind of hard to keep a business going when there are whitecaps in the street.

It wasn’t just Five Points last night, of course. I saw someone else stalled in Shandon after the waters receded. And state GOP Executive Director Matt Moore Tweeted this, at about the time I Tweeted out the double rainbow:

That’s no everyday occurrence — or rather, it shouldn’t be. That kind of flooding in Louisiana inspired Randy Newman to write this wonderful song 50 years later:

Let me leave you with a theological question: If one rainbow means it’s not going to flood any more, is a double rainbow a double guarantee? Or is it a toggle sort of thing: One the promise is on; two it’s off? Is it like adding positive three to negative three, so you end up at zero?

In Columbia, I fear that may be the case.

21 thoughts on “Does everything come in twos now?”