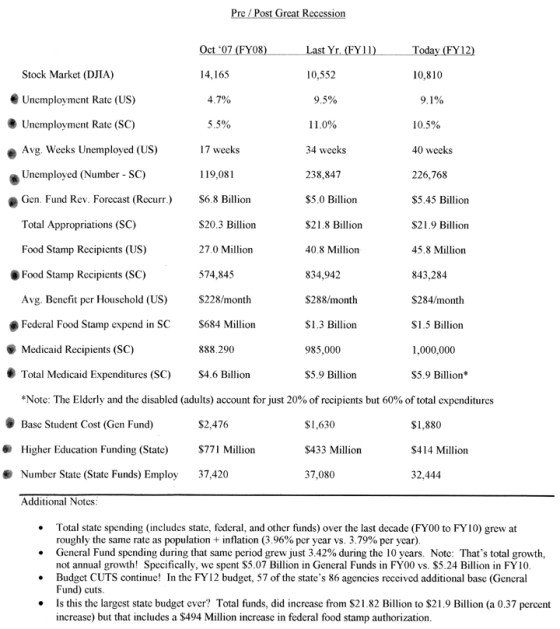 In a more serious vein, I thought I’d share with you more of what Joel Lourie had to say at Rotary today.

I realize when you read that headline, you’ll think, “So? Everybody knows that, and all politicians say it.”

But Joel said it better than most.

One thing he did was share the numbers above — which I scanned directly from the sheet he shared with me afterward. (To read it better, click on it.) The numbers provide statistical snapshots of South Carolina before and after the Great Recession hit.

What Joel had to say about that was not — as you’d expect in a lesser politician — to complain about those awful Republicans (which in a Democrat in SC these days shows remarkable restraint), and blame it on them. It was more to say look, here’s the situation we have, and this is what we must deal with.

And to him, the way out is not to pass this or that particular piece of legislation (although he did make an able case for comprehensive tax reform), or to embrace this political ideology or reject that one. Nor does he see our state’s salvation in anything that government might do, because government can only do so much. All government can do is pursue whatever policies it can that encourage our economy to come back.

As an example of how lawmakers should work together to allow jobs to emerge in our state, he told the story of how Democrats and Republicans worked together to make sure Amazon didn’t take its 2,000-plus jobs and leave this year, how they worked together to turn a 2-1 “no” vote into a 2-1 “yes” vote for the sake of the Midlands, and of South Carolina. In that ecumenical spirit, he particularly praised his old USC classmate, House Majority Leader Kenny Bingham.

I never was as wholeheartedly for the Amazon deal as Joel was, but I certainly appreciate his point, just as I appreciate the motivation that he and Kenny and so many others had to turn that around for the sake of their community.

For Joel, that sort of service to the whole community is what it’s about, just as it was for his father before him. And because he delivers that service so earnestly and ably, I’m proud to know him. I didn’t tell him that at Rotary today. You don’t want stuff like that to go to people’s heads, you know.

32 thoughts on “Joel Lourie: What we need in SC is jobs”