The other day, I was at the presser at which Jon Huntsman announced that Attorney General Alan Wilson was supporting him (which I still intend to write a post about, but haven’t had time to go back through all my notes), and at one point I happened to look around and think how very, very young most of the media people were. 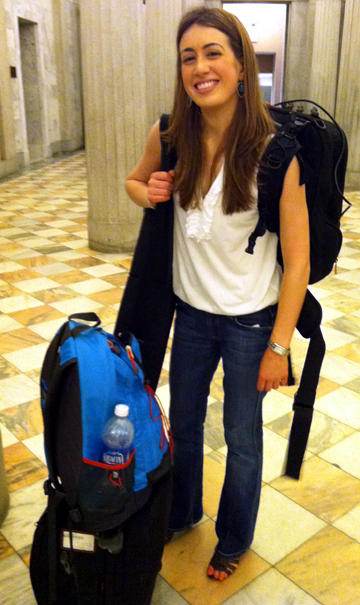 When I stood in that same place two years ago representing The New York Post, in front of that same (I think) lectern, listening to Mark Sanford tell about his surprise vacation in Argentina, I didn’t think that. I saw mostly usual suspects I had known for years. (Although I did notice in photos of the gaggle later that I had the grayest hair in the bunch. It was one of those “Who’s that old guy? … oh!” moments.)

But the biggest difference between this group and the media mob scenes I experienced when I was as young as these kids were was that the TV crews are so much smaller. As I saw Ali Weinberg of NBC packing up her stuff after, I mentioned to her that back in the day, her network would have a four-person crew covering a presidential candidate: the talent, (at this point she started saying it along with me), the camera guy, the sound guy (and back then those two jobs usually were filled by guys), and the field producer. Now, it’s just her. And she’s in front of the camera, behind the camera, carrying the equipment, handling her own arrangements, Tweeting, and I don’t know what all.

Of course, it’s been this way for several years now. I remember Peter Hamby and others doing the same thing four years ago.

But seeing someone as petite as Ali getting ready to carry all that stuff kind of dramatized the situation. Yes, Ali agreed with me, all told it probably did weigh as much as she does. And no, she didn’t need any help.

Her affiliation reminds me of the NBC crew I kept running across in Iowa in 1980 when I was following Howard Baker, who was running in the caucuses that year. I rode with Jim and Flash (the sound and camera guys, respectively) through an ice storm in a four-seater plane between Des Moines and Dubuque. Just the two of them, the pilot and me. The pilot kept squirting alcohol on the outside of his windshield to make a clear space in the ice about the size of his hand to see through to fly. When we got out on the tarmac — which was covered in ice — I went to put my overcoat back on, and the wind caught it and I started gliding across the runway like a ship on the sea. (I only realized later — after the crash of Air Florida Flight 90 into the Potomac in 1982 — how dangerous that trip was.)

On another occasion, the producer of that crew — a pretty young woman who reminded me of the actress Paula Prentiss — overheard my photographer, Mark, and me discussing where we were going to stay the night and holding open our wallets to see what was left inside. She offered to put us up if we were in a bind. Producers had that kind of cash to throw around in those days. Like Ali today, we said no, thanks.

Those days are long gone.

6 thoughts on “The new normal: This is what a complete network TV crew looks like today”