When I first went to work at The State in 1987, I immediately opened an account with the newspaper’s credit union. In our old building 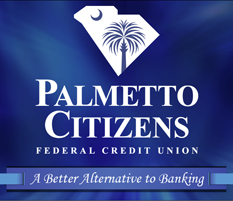 there in the shadow of Williams-Brice Stadium (it now houses part of S.C. ETV) it was located in what I remember as practically a closet in the Human Resources department — a cubby behind a sliding glass door and curtain.

Perhaps my memory exaggerates. In any case, it was small. But it wasn’t there for long. The company credit union soon merged with Columbia Teachers Federal Credit Union — which had been formed in 1936 when 10 individuals all chipped in $5 apiece. Columbia Teachers opened a branch just down the street from us near the intersection of Shop and George Rogers (or is it Assembly there? hard to tell), and put an ATM in the basement of our building.

By this time, the credit union had expanded well beyond just Columbia teachers, and in 2001 changed its name to Palmetto Citizens Federal Credit Union.

They’ve still got my money — what there is of it — including the account where I put revenues from the blog. Which will, for the next year, include payments from the credit union itself, for the ad you see at right. Which has a neat sort of circularity to it…