Here’s something for the “this just in” department:

WHITSON TO RETIRE AS PRESIDENT OF COLUMBIA COLLEGE IN 2012

Dr. Caroline Whitson, the 17th president of Columbia College, will retire at the end of this academic year – June 30, 2012.

Since coming to the college in 2001, Dr. Whitson has been an energetic advocate for women’s education and for 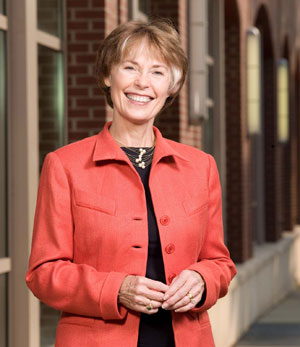 improving the status of women in South Carolina.

In announcing her retirement on behalf of the Board of Trustees, Chairman Lex Knox said, “Columbia College has been very fortunate and blessed to have someone of Dr. Whitson’s character and talent to lead us for the past decade. She has been an outstanding leader through challenging times, and has steered the college through needed changes. While disappointed at the news, we respect her decision and certainly wish her well.”

Dr. Whitson said, “I am well aware that the successes the college has enjoyed during my time here are a direct result of the work of a talented, committed faculty and staff and the support of an engaged Board of Trustees. I have been fortunate to have the opportunity to work with and learn from them.”

As president, Dr. Whitson championed the establishment of the college’s 4Cs. The unique leadership model combines academic and co-curricular programming to support students in the development of the Courage, Commitment, Confidence, and Competence to lead for change. She guided the expansion of the college’s Leadership Institute, which serves both girls and professional women. Dr. Whitson founded the Alliance for Women, a partnership between Columbia College and the Governor’s Commission on Women, when the commission was targeted for closure in 2004. The Alliance has supported entrepreneurship for women, including bringing both the Women President’s Organization and Make Mine a Million to South Carolina.

During Dr. Whitson’s tenure at the college, annual fund-raising has more than doubled. The college’s endowment has increased by 40%, including the establishment of both the McNair Scholars program and the Reeves Endowed Chair in Leadership Studies.

Facility expansion at the college of 1,269 students includes the addition of a new student union, residential cottages and an athletic complex, as well as renovation of the freshman center, the Goodall Art Gallery, Edens Library and the Cottingham Theatre. The installation of solar panels and a campuswide revision of energy systems have significantly reduced the college’s carbon footprint. A campus beautification program led to implementation of an extensive landscape design.

Recently Dr. Whitson signed agreements for research and for faculty and student exchanges with both the State University of Mongolia and the Hiroshima Jogakuin Women’s University.

During her tenure at the college, Dr. Whitson has been a leader in civic affairs. She chaired the Richland County Transportation Commission, the South Carolina ETV Endowment board and the Presidents’ Council of the South Carolina Independent Colleges and Universities. She has served on many boards, including those of the United Way of the Midlands, New Carolina, and the Midlands Business Leaders Group. Nationally, she has served on the University Senate of the United Methodist Church, as a member of the President’s Circle in the National Council for Research on Women, and on the board of PLEN (Public Leadership Education Network).

Dr. Whitson has been honored with a “Woman of Distinction” award from the Girl Scouts of the Congaree Area, as the “Outstanding Advocate for Women in Business” from the Greater Columbia Chamber of Commerce, and with the Martha Kime Piper award from the South Carolina Women in Higher Education.

Chairman Knox said Vice Chair of the Board Becky Laffitte will head the search committee to find a new president for Columbia College, with the rest of the committee being named within the next two weeks. The committee will include some board members as well as representatives from the rest of the college community.

Caroline has been a great person to work with in the community. I served with her on a local advisory council for the Knight Foundation years ago, and dealt with her during the effort to pass the sales tax referendum for transportation last year — which, as you’ll recall, I interviewed her about on “The Brad Show.” She had helped lead community conversations about transportation for several years leading up to that.

I understand that she plans to stay in the community. That’s good news.

14 thoughts on “Caroline Whitson to retire from Columbia College”