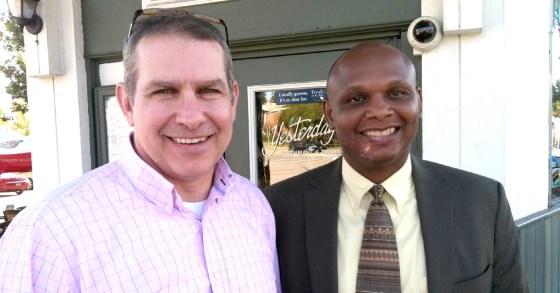 Jeff Miller and Warren Bolton, outside Yesterday's in Five Points.

Yesterday my phone rang, and told me Jeff Miller was calling. This was confirmed when I answered and heard his voice:

“I’ve got that Dole story for you.”

Except that he still didn’t have it. He was just stringing me along…

The background: I pulled Jeff out of The State‘s Newberry bureau in late 1987 to assign him to cover the upcoming Republican presidential primary here — the one that launched George H. W. Bush toward the nomination and the presidency, and did so much to burnish the S.C. primary as the early contest that picked winners.

I had other political reporters — plenty of them, in those days. But Lee Bandy was up in Washington, and my others who could do the job would be busy with the Legislature by the time of the primary. I needed somebody to work this story full-time, and for the duration. We could see it was going to be a big deal, with the nation’s eyes on South Carolina, so I didn’t want to treat it like just another story. Gordon Hirsch, who was then the news editor, suggested Jeff as somebody who, despite lack of political experience, could do the job. I jumped at the offer, and our state editor lost him from then until after the primary. (Actually, the State Desk have lost him permanently — eventually, he joined my governmental affairs staff for good. I just can’t remember whether he went back to Newberry for a while first. It’s been a LONG time.)

He did a great job, and had a great time, I think. I still remember him talking about being on the bus with David Broder, and what a nice guy Broder was. Jeff was young, and new to all this, and he was really impressed that the legendary Broder would just sit and talk with him like a regular person.

But he wasn’t too starry-eyed to do his job well. I was pleased. There’s just this one beef. After the primary was over, I had one more story idea for him. After all these years, I can’t even remember what the specific idea was, but I thought it was a good one — it was an angle about Bob Dole’s defeat here that no one else had done. Jeff wasn’t so sure. He was also pretty exhausted with writing about that stuff, and needed to move on to his other reporting duties. I kept bugging him about it — just this one more story, I kept saying. I was like that as an editor — even when people had been working double-time for a long time, actually even when they were on vacation, truth be told — and I usually got my way, through sheer insufferability. Not this time. Jeff would say, “Yeah, sure…” but I never got it.

So he owed me.

Today, he paid me back by taking Warren Bolton and me to lunch, on his first visit back to Columbia in a decade. We went to Yesterday’s, of course, because I got to pick (see the ad at right). We had a great time talking about the Dole story (neither of us can remember what it was about now — but it was gonna be good). We talked about the Cosmic Ha-Has, the softball team on which both Jeff and I played (I was the last Ha-Ha left at the paper; all gone now).  We talked about the county league basketball team that Jeff and Warren played on, and how neither of them plays any more. (I went out to play with them once. For some reason, they never begged me to come back.)

A lot of the intervening years — I was last Jeff’s editor in 1993 — Jeff was still covering politics, but for other papers. Washington became his home base, and when I last saw him, at the Republican National Convention in New York in 2004 (below), he was in the Washington bureau of the Allentown Morning Call, if I remember correctly. In 2006 he left newspaper work, but has stayed in D.C. Now, he’s the vice president for communications of The Leadership Conference on Civil and Human Rights.

It was great to see him again. Warren, too. But it’s usually not so long between times I get to see Warren. 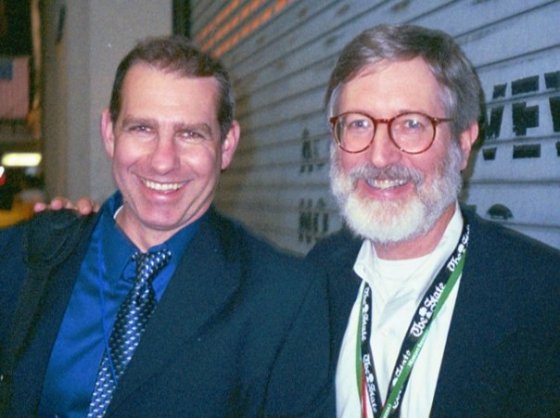 Jeff and me on the last night of the RNC in NY in '04. The marathon was nearly over (conventions mean 20-hour days for press types). Like my beard? I was so much older then; I'm younger than that now.

5 thoughts on “Great to see Jeff, but I still await that Dole story”