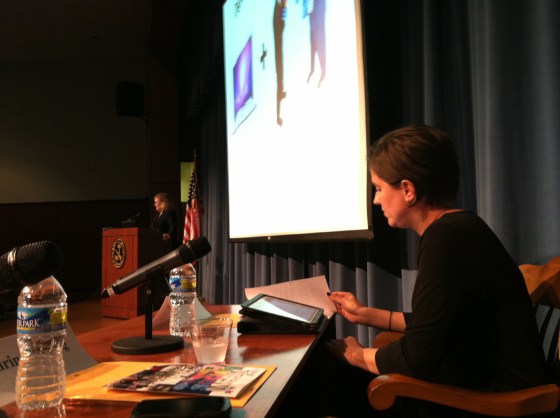 Laurin is presenting, Nancy is going over her notes, and I'm trying to think up some mayhem that will get me sent to the principal's office. Just like school.

Last night, I participated in a symposium on politics and social media at Francis Marion University. Which was great. Trouble is, I was on a panel with Laurin Manning and Nancy Mace. And they were better prepared than I was.

See, I thought it was going to be just a panel discussion, so I had jotted some notes about points I wanted to be sure to hit on, and showed up. Laurin and Nancy had slide shows, and got up and made presentations. So I had to, too. No problem, really, because I can fill any amount of time… I talked about the old blog and why I started it and how it related to my old MSM job, and the new blog and how it’s going, my Twitter feed (dang! I forgot to mention I’m one of the Twitterati!), how I hate Facebook (it’s the AOL of this decade), “Seinfeld,” my Top Five Baseball Movies, and I don’t know what all.

Then at some point, I realized I’d gone on enough, or more than enough, and shut up. Which I think was cool, but it was way less polished than what the other panelists did.

You know how, when you were in school, there were these girls (and sometimes traitor guys) who always showed up with their homework done? And raised their hands and asked for more work, for extra credit? And when the teacher had been out of the room, and came back, they told her what you had been doing while she was gone? It was like that. Laurin and Nancy were good.

But I survived to the actual panel discussion part, and that went well (I think), so all’s well that ends that way. As it happened, I enjoyed it.

I especially enjoyed learning from Laurin and Nancy.

Laurin was sort of a mentor for me when I started blogging in 2005, and she was well established with the legendary Laurinline. She later was part of the unstoppable Obama social media machine of 2008. Recently, she’s blogged at SC Soapbox.

Nancy, the first female to graduate from The Citadel (how’s that for intimidating?), is founder and CEO of The Mace Group, LLC. She’s also partners with Will Folks in FITSNews— she does the technical side, and leaves the content to Will.

I’m not going to share with you all the cool trade secrets they imparted, because knowledge is power, and I want it all to myself. But I will share this anecdote that they told us about:

You know how Will started his blog? By accident. He was actually trying to post a comment on the Laurinline, and got so confused in trying to do so that he inadvertently set up a blog of his own. Really. That’s the way Laurin and Nancy tell it. The site is much more technologically sophisticated now with Nancy involved, and has more than a million page views a month — compared to my measly traffic, which has only broken a quarter of a million a couple of times. (That’s it. That was my display of humility for this month.)

Anyway, that’s why I was in Florence.

10 thoughts on “Laurin and Nancy at the social media symposium”