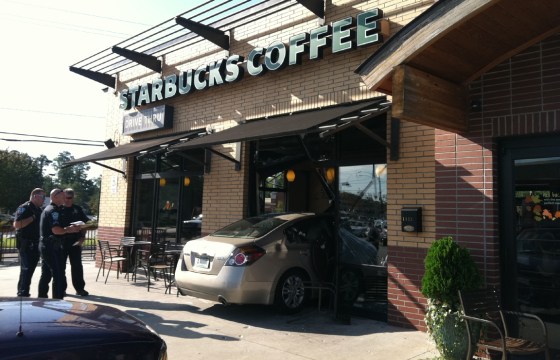 OK, not really, and in fact, at least one person appears to have been injured. So it’s no joke. But the truth was, that headline was, I must admit, my first thought when I beheld the scene. Or rather, my second. My first was, “Someone was even more anxious for a cup of coffee than I was.”

This morning, I was heading back to Columbia from Florence (after participating in a symposium at Francis Marion University last night), and debating whether I should stop for a Starbucks on my way out of town. Why the debate? Well, I’d just had two-and-a-half cups of coffee at breakfast.

I parked, got out and approached, and saw the above. The third- or fourth-hand story I got from one of the baristas was that a woman was trying to park and her brakes failed. Or she hit the wrong pedal. Or something. I looked at the curb she would have had to jump, and decided it was probably “or something.” (It turns out the driver was complaining of chest pains.)

I didn’t bother any of the police officers standing in a clump at the other end of the firetruck, because they were busy standing there staring, talking in murmurs, and waiting for something. Besides, I had to get on the road. Which I did, after Tweeting out the above picture.

I stopped again shortly thereafter, and saw that the FloMo had this report:

FLORENCE, S.C. –A Nissan Altima crashed into the drive-thru Starbucks at Five Points in Florence.

According to emergency responders, the undentified female driver was complaining of chest pains before and after the accident. Although she showed no signs of cardiac problems, she self-administered nitroglycerin medication as a precaution.

The driver was then taken to the hospital to assess her injuries.

An unidentified female customer also sustained minor injuries when she was struck by both the car and debris from the accident. She was able to transport herself to the hospital.

The Starbucks is closed until further notice.

So no joke, and I hope everyone will be OK. And that there will be coffee next time I go there. 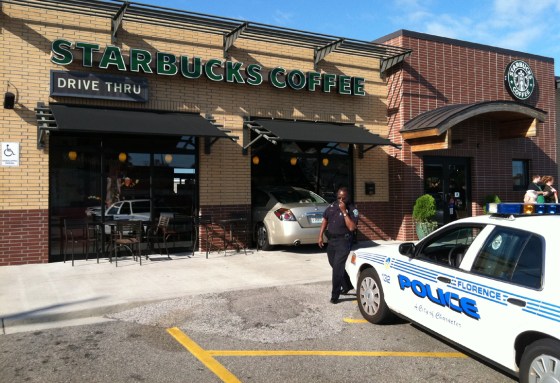