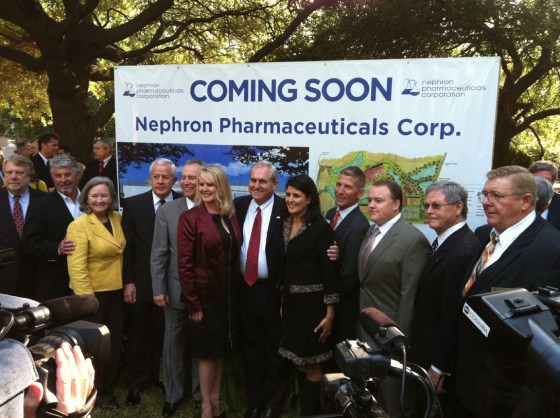 First, for the overview, I’ll give you the press release from today’s event (provided by the SC Commerce Department):

“We are excited to expand our company by locating our new manufacturing facility in Lexington County. This is a big step for our firm and will help us meet increased demand, expand our market share and develop our pipeline of products. South Carolina has an excellent business environment and we look forward to our expansion into the Palmetto State,” said Lou Kennedy, CEO of Nephron Pharmaceuticals Corporation.

Nephron Pharmaceuticals Corporation will establish a new pharmaceutical manufacturing campus and offices in Lexington County. The company is based in Orlando where it currently operates 250,000 square feet of manufacturing, distribution and packaging facilities. Additionally, the company has distribution centers in Kentucky and Arizona.

“It’s another great day in South Carolina with today’s announcement. We celebrate Nephron Pharmaceuticals’ decision to locate its new manufacturing facility in the Midlands and create hundreds of well-paying new jobs. This is a big win for our state,” said Gov. Nikki Haley.

“I am gratified that Lou and Bill Kennedy, who have already established the Kennedy Pharmacy Innovation Center at Innovista, see the University of South Carolina and our state as locations to further their commitment to pharmaceutical manufacturing with world class quality and efficiency. Their vision and keen business acumen have led to an important second step in increasing innovation and the knowledge economy in South Carolina,” said Dr. Harris Pastides, USC president.

“Nephron Pharmaceuticals’ investment and new jobs will have a huge positive impact on our state. This new facility will be a major boost for our pharmaceutical manufacturing sector. Today’s announcement is the largest one in the state’s life sciences industry this year,” said Bobby Hitt, Secretary of Commerce.

The new facility will be located on a 60-acre parcel of land near the Amazon facility in Lexington. It is expected to be up and running in the next couple of years.

“I would like to take this opportunity to publically recognize and celebrate the remarkable achievements of Nephron Pharmaceuticals and to hail their decision to expand their operations into their ‘home’ state. This expansion will bring over $313 million dollars into our local economy and will generate more than 700 jobs for the citizens of Lexington County, the Midlands and South Carolina. Nephron Pharmaceuticals Corporation is a

renowned leader in its field, and through the years has grown to manufacture over one billion units of medication. What an accomplishment,” said Lexington County Council Chairman Jim Kinard.

Central SC Alliance Chairman Jim Apple said, “Today’s significant capital investment and high-wage job creation announcement by Nephron Pharmaceuticals Corporation is a game changer in our quest to recruit international life science/biotechnology industries to the Central South Carolina region. This company is a market leader that produces millions of units of life-saving medications every year right here in the United States and shortly, product will be coming out of Lexington County. We want to recognize and thank the Kennedys for coming back home to South Carolina in making this announcement. The Central SC Alliance is proud to represent a dynamic nine-county region and we value the outstanding working relationship with the University of South Carolina and the S.C. Department of Commerce as we collectively grow our region.”

The S.C. Department of Commerce has committed a set aside grant of $4.5 million for site preparation and infrastructure. The company was also approved for job development credits, which will be available when hiring targets are met. The company will receive training support from the state’s ReadySCprogram.

About S.C. Department of Commerce

This was a big day for all concerned, as you can tell from the basic facts, but the pics below will help confirm. Everybody wanted to get in on the act — the governor, Harris Pastides and a large array of USC honchos, Lexington County Council, the Lexington legislative delegation, Steve Benjamin and his folks, and of course the whole economic development community, from Commerce Secretary Bobby Hitt (who was sort of the master of ceremonies) through all the local and regional recruiters. Walid Hakim and others from Occupy Columbia were there, which really confirmed what a big deal it was.

There was enough glory to go around for all, especially for USC. Hence the Horseshoe venue. Lou and Bill Kennedy got their start at USC, and they have a child who is a freshman at the university. More to the point, they had already set up the Kennedy Pharmacy Innovation Center as part of Innovista. This is what Innovista is to look like, folks. Not White Elephant parking garages, but industries getting a foothold here through a research relationship with the university, then expanding into good jobs for South Carolinians.

After the formal ceremony, Lou Kennedy said the jobs they’ve produced in Orlando pay an average of about $70,000. And at this point, they don’t plan on bringing any of their Orlando personnel here.

So, very good news. And very little controversy — so far. House Majority Leader Kenny Bingham was given a chance to compare this to the fight Lexington County lawmakers had with the governor over Amazon (which will be this plant’s neighbor), and he declined. This one was nothing but cooperation.

Part of that may be that the industry itself wanted to come here, rather than having to be enticed. (There apparently were incentives, but no one — aside from those involved in the deal — knows what they were yet. I ran into my friend Kevin Dietrich of The Nerve, the scourge of incentives, there, and he didn’t seem on the scent of any yet.) But whatever the reason they’re here. And I don’t feel like I’m going out on a limb when I say that’s a very good thing. Congratulations to all involved, from the governor on down. 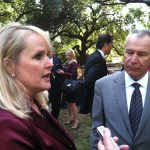 Lou and William Kennedy being interviewed after the announcement. That’s USC lobbyist Trey Walker in the background. 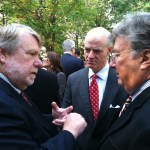 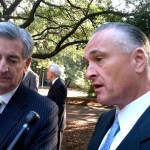 Sen. Nikki Setzler and Rep. Kenny Bingham, both of Lexington, being interviewed by SC Radio Network. 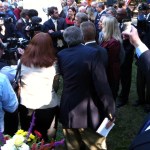 More media mobbing. Even Rep. Rick Quinn, bottom right, gets in on it. 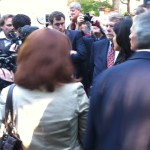 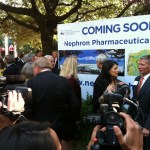 After the money shot. I like to get candids. 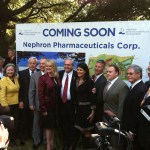 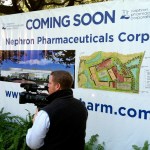 When I noticed a TV camera shooting the sign (not the one you see, another one), I shot it, too. 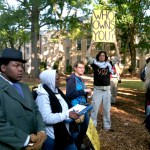 Occupy Columbia made an appearance. That’s Walid Hakim with the sign. (Sorry about the focus, but I liked the shot anyway.) 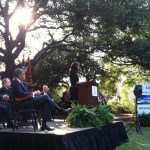 The governor has her turn, as Lexington County Councilman Jim Kinard (seated behind Hitt and Pastides) leans forward to listen. 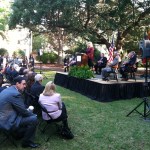 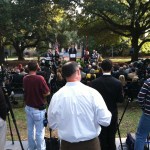 The announcement is made. That’s Bobby Hitt at the lectern in the distance, and Kevin Dietrich (white shirt) in the foreground.