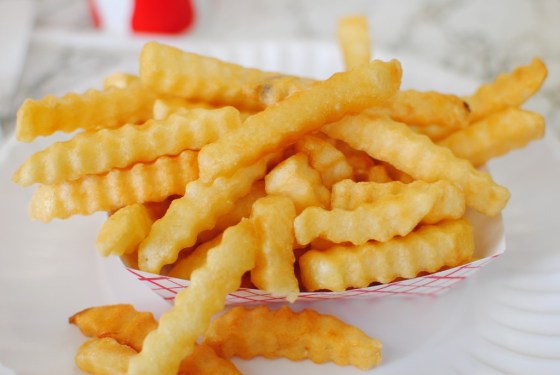 This isn’t Proust. In fact, I’ve never read Proust. And the descriptions I’ve read of Remembrance of Things Past never seem to recommend it, because they always note how amazingly long it is. In any event, I don’t read French, and it seems a waste to spend that much time on something and not know at the end whether it bore any resemblance to what the author intended.

But today, under the most mundane circumstances, I experienced something like the episode of the madeleine. Really. It was way literary.

Lanier and I were having lunch at the Mousetrap, and I had ordered the hamburger steak with fries. We had told the waitress Lanier had a pressing appointment, and our orders came out quickly, and hot. Something about the look of the fries put my mind on the verge of something. They were perfectly ordinary crinkle-cuts, but there was something about the color, the apparent consistency. When I tasted one, everything — flavor, moisture, temperature, mixture of crispness and tenderness, the grease, the feeling against my teeth — brought back a very specific memory from 43 years ago. That was when I had tasted fries that were exactly like these.

Initially, the memory that came to me was visual. In my mind’s eye, I could see that I was in a diner. From the center of the field of vision running off to the right was a counter, with high stools, behind it one of those windows to the kitchen. Starting at the center and running toward the left was a window with blinds — it was dark outside — and then a doorway out to a sidewalk. I couldn’t see where I was sitting — a booth, a table? — only what I could see, looking up, from that vantage point. There were people moving about, but they were indistinct, ghostly. I couldn’t fix on them. Then came the sounds of the place, the clanking dishes, the hiss of the grill, the rowdy sounds of boys’ voices.

I knew where I was. The junior varsity basketball team of Bennettsville High School — 1967-68 school year — was on the road. We were having dinner after a game in a small town in the Pee Dee, before getting back on the bus to head back to B’ville. I was 14 and this was an adventure, one of many like it.

I was part of the team and not on the team — sort of like Ollie, the team manager, at the start of “Hoosiers.” After the grueling tryouts (one gets a taste of eternity in windsprints up and down the court), the coach looked down at me and told me I had almost made it. He was sure I’d be ready next year. If I’d be the manager, I could work out with the team and play against Robin Frye in practices. Robin was the only guy as short as I was who had made the team. I was in the 9th grade, and wouldn’t get my height for a couple of years.

Most of my duties were pretty simple — gathering up the balls after practice and such. But I had one that I regarded as core, one that made me feel important beyond my years. I was the official scorekeeper for the team. I sat at the folding table along the sidelines with the other team’s scorekeeper on my left, and the guy with the scoreboard controls and buzzer on my right. My supreme moment of the season was in a late home game. One of our guys was fouled, and he took his free throw and made it. The referee was giving to the ball to the other team to take out when I told the guy next to me to hit the buzzer. The ref came over and I told him our player was entitled to a second shot because it was a one-and-one situation. The ref said he didn’t think it was. I told him I was sure, and showed him the fouls on my sheet — I remembered each one. The other scorekeeper said no; there hadn’t been that many fouls.

The ref said that since I was the home scorekeeper, my record was official. He went back out and gave our guy another shot.

I’m surprised I didn’t fall off my folding chair, I was so drunk with power. I couldn’t believe it — I had given a signal, and that whole packed gym had stopped everything to hear what I had to say. And then, my word being law, I had pronounced my ruling, and the ref and all those other adults had obeyed.

It’s good to be the scorekeeper.

But I kept my face impassive, and acted like this was the way things were supposed to be.

In the late 80s, I attended my cousin’s graduation. His was the final class to graduate as Green Gremlins. The graduation was held in the football stadium of the new, consolidated Marlboro High School, which everyone would attend the next year. But then a storm came up. Those in charge decided everyone would repair across town to the old school, and we’d complete the ceremonies in the auditorium there. So we did.

The place was packed, and steaming hot. There wasn’t enough room for everyone to sit in the auditorium, so people were distributed anywhere they could get a vantage point of the stage. I found myself in the wings of the stage itself, watching the kids come up for their diplomas. I remembered that one of the backstage doors opened onto the gym, and slipped away to go check it out.

Speaking of “Hoosiers” — remember the end, with the camera panning slowly through an almost-empty gym, obviously years after the miraculous championship? There’s a small boy dribbling and taking shots, alone, at one end of the court, and every time the ball hits the court surface, the echoes resound, as the camera gradually swings up and zooms in on the portrait of The Team. It was like that. It felt like that; my every step sounded like that.

I went over and stood in the spot from which I had issued The Ruling. Odd, it strikes me now, that a movie hasn’t been made about that great moment in sports history. Hollywood doesn’t know what’s good, I guess.

Those are the things I thought of when I bit into that one fry. No, it’s not great literature, but the same principle of involuntary memory applied…

7 thoughts on “At least the fries were French”