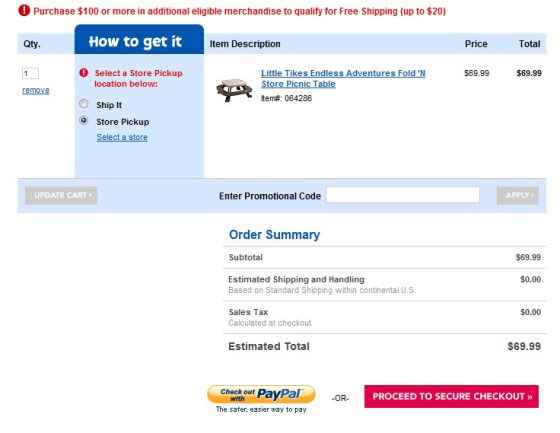 To begin with, I tried to do it the old-fashioned way. I asked my Dad if he’d like to ride out to Harbison with me, and he said sure, so I picked him up in the truck and we went out there. We went into the store with me clutching the ad that showed the item on sale. After my usual thing — wandering about the store looking for it without asking for help — didn’t work, my Dad asked someone.

This led, indirectly (I’m giving you the short version here) to someone going to the back and searching for about 20 minutes before informing me that they were out of the item. They offered to order one for me, but I said, don’t bother, I’ll order it online from home. I thought I’d read that shipping was free, and I figured I’d save myself another trip to the store.

So I got home, and I went online, and there was the item, so I put one in my cart, and went to check out. Where I found that instead of $69.99, it would cost me $111.40. Turns out I would have to order another 40 bucks worth of merchandise from that store to get the free shipping.

OK, so I clicked on the “store pickup” radio button, and presto!, the shipping charges disappeared. Seemed fair enough to me… they put it on a truck that would be going there anyway, and I drive a few miles out of my way, and I pick up the item. Fine.

One more step, though: I had to click on the link that said “select a store.” Fine. I went there, and filled in my zip code, and was shown the two stores in my area.

Then came trouble: I couldn’t click on either store. They were grayed out, because the item was “Out of stock (or not carried) at this store.”

Well, duh. Otherwise I would not be placing an order from it and opting for “store pickup.”

Well, obviously there was a malfunction in the software, so I called the store to go back to Option A, which was to get them to order it for me.

I just needed to deal with a human being, thereby placing me back in the land of sweet reason.

So I called, and after listening to some singularly bad muzak (it was country, and I think it was intended to be patriotic, but it was extremely off-putting), a man came on the line.

Of course, sir, I’ll be happy to help you sir. What’s the item you were trying to order? I give him the stock number, and he keeps me waiting a brief while before politely informing me that they couldn’t order that particular item for me, because it wasn’t in the store already. If it were in the store, I could have store pickup, but not if it wasn’t already in stock.

But… they had offered to order it from me when I was there, I insisted, my voice rising a bit.

They must have meant they would order it for home delivery, he said, beginning to sound a bit put out with me.

But… if we did that, the cost of the item to me would almost double.

Yes, sir. Unfortunately, however, the store could not place the order for me unless the store already had it. Unless I’d like to have it delivered to my house for $50 more, a transaction I could easily have managed without involving him at all.

I was beginning to feel a bit panicky, like Yossarian in the nose of his B-26, surrounded by glass, with flak exploding around him so thick it looked like you could walk on it…

And as he sensed my disorder, the man tried to placate me a bit by admitting that yes, perhaps, the way it is worded, as “store pickup,” implying an item being ordered from elsewhere when it was already there, was a bit misleading, nevertheless…

Fortunately, I calmed down enough to ask him whether… by any chance… this item, which had just been advertised as being at his store today… might be coming in on a subsequent shipment without my having to place an order.

He said that was possible. And he had a truck coming in tonight. Perhaps, if I called first thing in the morning, the item would be there and I could place my order.

So I resolved to do that. But I must confess, there’s this paranoid little voice at the back of my head that tells me that by that time tomorrow morning, Colonel Cathcart will have raised the number of missions on me once again… 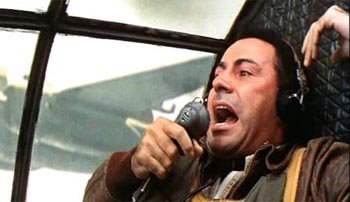 Yossarian, screaming: "But why would they have to ship you one if you already HAVE one?!?!"