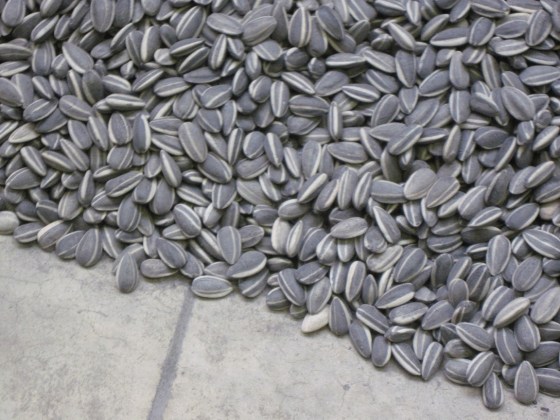 A few of the fake sunflower seeds (life-size if you click on 'em).

Yesterday, I saw this BBC item about how supporters of one Ai Weiwei were helping him pay the $2.4 million in taxes and fees that Chinese authorities say he owes:

And I thought, Hey, is that the sunflower seeds guy? The story didn’t say…

And then I moved on and finished my Virtual Front Page for the day.

A few minutes ago, I went back to check — yep, he was the sunflower seeds guy!

This was an… artwork, um, installation… whatever… that I saw in London late last year, at the Tate Modern. It was 100 million fake sunflower seeds (made from porcelain, no less), strewn across the floor of this huge, warehouse-like room. Weiwei had somehow persuaded the people of some Chinese town to make them by hand. I don’t know whether overtime was involved. I think it was supposed to be an economic stimulus or something.

Here’s what we’re supposed to get out of it, if we’re the right sort of people:

The work continues to pose challenging questions: What does it mean to be an individual in today’s society? Are we insignificant or powerless unless we act together? What do our increasing desires, materialism and number mean for society, the environment and the future?

This is one of those things that make me feel like a total philistine. I see a Van Gogh, and I get it — it’s beautiful. I see a Weiwei, and I turn into a Homer Simpson. I think, That’s impressive, all right, but… you can’t eat ’em. I also think:

And so forth. You know what, scratch the Homer Simpson analogy; that’s demeaning (to me). Seeing things like this make me more like… Mark Twain and his waggish friends in The Innocents Abroad, berating the European tour guides for showing them all that old stuff, because by golly they were paying good money, and wanted to see something new, etc.

Right after the Weiwei exhibit, I saw something that I did understand — my very first public bathroom signage that actually said “WC.” So I took a picture of that. I felt reassured. 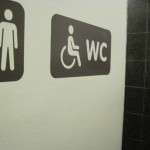 After that, we walked downriver a bit and toured the Globe theater — which, as it turns out, is not the actual, original Globe, nor in the right location — yet another fraud! Don’t get me started…

Anyway, I hope Weiwei gets out of trouble with the Chinese authorities. 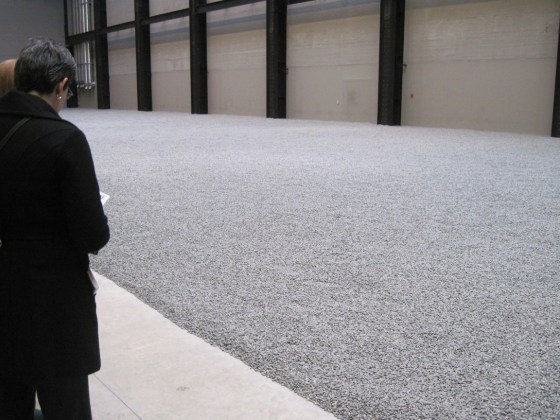 29 thoughts on “Thanks for the ‘sunflower seeds,’ Mr. Weiwei”