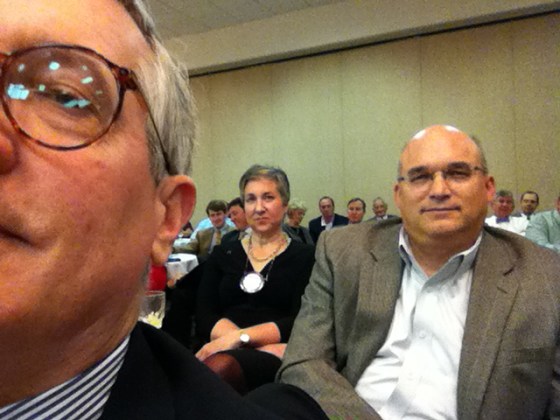 It was great to see him. I learned that he was there during the part at the start of the meeting when members stand up to introduce their guests. He was, of course, introduced as a key contributor to bradwarthen.com, a distinction to gild any resume.

As he was introduced, I was standing by the piano holding my guitar, waiting to go on and do Health and Happiness.

I’m afraid I disappointed both Doug and Kathryn by not using much of the material that y’all so generously shared with me. But don’t worry — I’ve saved it all for next time.

What I did instead was a routine that was a last-minute inspiration, in which I sang bits of Dylan’s “The Times, They are a-Changin'” interspersed with topical commentary in a voice that would have been a cross between Dylan and Arlo Guthrie, except that I had awoken sort of hoarse that morning.

I had planned to record a video version for y’all, but my voice got worse and my asthma kicked up over the long weekend, for the first time in quite awhile. It has occurred to me that this may be divine retribution for my routine, but the College of Cardinals is still out on that.

If I feel better any time in the next few days (basically, I’m functioning fine; but if I try to sing, I start to cough), I’ll still do it for you.

Meanwhile, I was wondering what Doug thought of Rotary. Seeing as how I write about it frequently here, and some of y’all ask about it, I thought his fresh and unbiased impressions might be of some interest to y’all.

Below you see Kathryn and Doug with USC President Harris Pastides, our speaker last week. You may note that there’s no one left in the room. Our friends had kept him behind for interrogation. I managed to spring him right after this was taken… 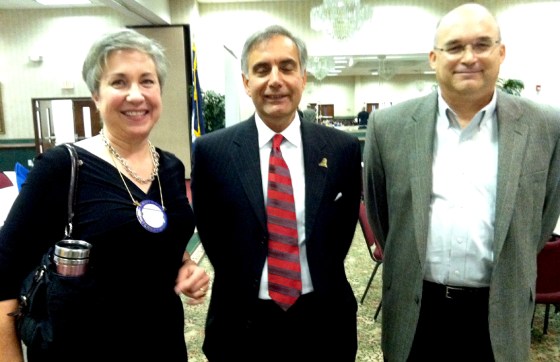 60 thoughts on “What did you think of Rotary, Doug?”