Outside Smiley's house on Bywater Street. No need to knock. George knows I'm here. And where's he going to go? It's a cul de sac. It's over, old friend.

I’d been holding this back for when the movie comes out, but now that it’s passed me by (although I look forward to its being at the Nickelodeon next month), I am much embittered and have decided to go public with the whole story — the Official Secrets Act be damned. See how they like it when it’s all laid out in the papers. Perhaps I’ll go with The Guardian; that should sting. Let Parliament launch an inquiry. Let them connect me to the notorious Rebekah Brooks, for all I care. (After all, I’ve done a freelance job for that same outfit, in the time since they cast me out.) I’ve been a good soldier, put in my time, watched and waited. All for naught. Here’s my story…

As you know, I went to the UK a year ago, ostensibly as a tourist. That wouldn’t fool a real professional, of course, but one keeps as low a profile as one can. I have my own tradecraft for this sort of thing — I make a big splash, publicize my whereabouts… what spy would do that?

My mission — to find the Circus, and more importantly, George Smiley himself.

It was quite a challenge. George hasn’t been seen since 1982. And the original location of the Circus, now that MI6 has the River House (all mod cons, as Bill Haydon would say), is shrouded in service legend. It’s not something you’d assign to some probationer straight out of Sarratt.

First, we spent a couple of days settling in, establishing patterns. One assumes that tiny Toby Esterhase‘s lamplighters are everywhere, so you need to paint them a picture, let them get complacent. This we did — from Heathrow to Swiss Cottage (the very spot where General Vladimir would have been picked up as a fallback, had he not been killed on Hampstead Heath), then all over the city on the Tube, aimlessly. Trafalgar Square, St. James’s, Fortnum’s, Buckingham, the Globe, the Tate, the Cabinet War Rooms, the Tower, hither and yon in the City.

Finally, at the end of our third full day, after night had fallen, we ambled up Charing Cross Road, affecting to be interested in bookshops. We almost missed it, but then there it was — the Circus itself. There was the Fifth Floor, and even Haydon’s little hexagonal pepperpot office overlooking New Compton Street and Charing Cross. Quick, I said, get the picture. It took a couple of tries, the way these things do when you need to hurry. Thank heavens for our “tourist” cover; it excuses all sorts of odd behavior. Then on up the street, and an hour or so of browsing at Foyles to check our backs. Found a couple of decent-looking biographies of Lord Cochrane, but didn’t buy one. (They had shelf after shelf of naval history; it went on and on.) Then we wandered about in the West End, to clean our backs as much as possible, before heading back to Swiss Cottage.

One thing down. Hardest part to come.

By this time, I had decided not to risk the actual modern HQ of the SIS. Mix fact with fiction like that, and it’s like mixing matter and antimatter. Could blow you clear across the universe, or at least to Brixton, and who wants to go there, really? That’s why they put Scalphunters there.

We played tourist for another day. Then another. The Sherlock Holmes museum. A side trip to Greenwich, to stand astride the Meridian, and see the coat Nelson wore at the Nile. Back into town for the British Museum.

Then, it was our last day in London. Had to go to Oxford the next day, and check on Connie. Connie is high-maintenance. So it was do-or-die time. We opted to do.

We thought that twilight would be the best time to descend on George. Vigilance is low. Everyone’s tired then; time for tea and meet the wife. So we went to that general part of town. Spent several hours at the Victoria and Albert. Loads of statues and the like.

We took the Tube to Sloan Square, a good half-kilometer from Bywater Street, and went the rest of the way on foot. We entered the cul de sac as night descended (which it does before 4 p.m. at that time of year). There wasn’t a soul on the narrow street. Everything went smoothly. When we got to the part where Smiley lives, I tried to throw the watchers off by shooting pictures of houses other than his. In a way, though, they were all relevant. George lives at No. 9, of course. But the 1979 TV series was shot at No. 10. And No. 11 has a Banham security system, which the book describes as being on George’s house. No. 9 has an ADT system.

Anyway, after doing what I could to distract any lamplighters in the vicinity, I had J (her workname — best watcher in the outfit, is J) quickly shoot a happy snap of me in front of No. 9. She was a bit nervous, because there were lights in the basement-level windows. She said people who lived there would wonder what we were doing. I muttered no, they wouldn’t: “They know exactly what we’re doing.” The thing was to get it over with quickly, so we did. Given the hurry we were in, I’m struck, as I look at the image, by how placid and dispassionate and, well, Smileyesque I look in the image. Like I was channeling him in that moment.

Then, it was back out to King’s Road and back to the Underground as fast as our legs would carry us, trying not to show that our hearts were pounding like Peter Guillam’s when he stole the Testify file from Registry that time. I was getting too old for this, I knew. As I looked up at the Christmas lights in the trees on Sloane Square, they were as blurry as the stars in a Van Gogh.

I can hardly remember the next couple of hours, but I can’t forget the stroke of luck that befell us later. Nothing short of a miracle, it was.

We had decided to case Victoria Station and its environs, because we knew we had to catch a coach there for the trip to Oxford next morning, and it’s good tradecraft to reconnoiter these things ahead of time. We got a bit turned-around there, and ended up touring the whole station before we discovered that the coach station was on the next block. On one aimless pass through the vicinity of the ticket windows, I looked up and there he was. George himself. Right out of the first paragraph of this passage:

He returned to the railway station… There were two ticket counters and two short queues. At the first, an intelligent girl attended him and he bought a second-class single ticket to Hamburg. But it was a deliberately laboured purchase, full of indecision and nervousness, and when he had made it he insisted on writing down times of departure and arrival: also on borrowing her ball-point and a pad of paper.

In the men’s room, having first transferred the contents of his pockets, beginning with the treasured piece of postcard from Leipzig’s boat, he changed into the linen jacket and straw hat, then went to the second ticket counter where, with a minimum of fuss, he bought a ticket on the stopping train to Kretzchmar’s town. To do this, he avoided looking at the attendant at all, concentrating instead on the ticket and his change, from under the brim of his loud straw hat…

Apparently, our appearance at Bywater Street had sent him on the run, but we had stumbled into him anyway. I left him alone, except for grabbing this picture. You doubt that’s George Smiley? Look at this picture, and this one and this one, and then tell me that. ‘Course it was him. Stuck out a mile.

But now that I’d found him, what was the point? He was just my old friend George. I could hear Toby’s triumphant voice in my ear: “Brad! All your life! Fantastic!” But I ignored him. I got the picture, and moved on. I didn’t even look to see whether he had left Ann’s lighter on the floor.

My mission had been accomplished, and then some… Why did I not exult? All I felt was the urge to polish my glasses with the lining of my tie. But I wasn’t wearing a tie… 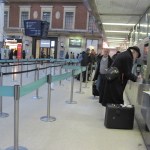 At Victoria Station, suddenly, there was George himself! 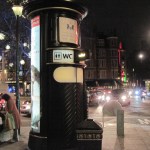 A phone-booth sized loo at Sloane Square. Note that the building in the background looks eerily like the Circus. As I looked up at the Christmas lights in the trees on Sloane Square, they were as blurry as the stars in a Van Gogh.

Outside Smiley’s house on Bywater Street. No need to knock. George knows I’m here. And where’s he going to go? It’s a cul de sac. This shot from inside the museum captured my mood as the do-or-die moment came. Getting lost among the statues at the Victoria and Albert, preparing to make our final move. 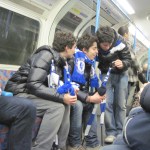 These “Chelsea fans” affected to be interested in something else as they followed us to that part of town. 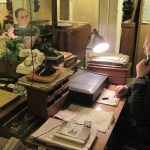 After the Circus, we went underground, to the Cabinet War Rooms. These chaps are made of wax. Permanent stiff upper lips. Killing time, watching our backs at Foyles. They have two whole shelf sections of naval history. The Circus itself, looming darkly back behind the bus. I posed for the usual tourist snaps, so the important pictures would seem natural. 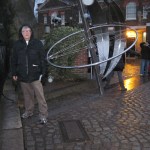 Astride the Prime Meridian, in the rain. The real tourists were queued up to pose before a plaque, for some reason. The coat Nelson wore at The Nile. He was a LITTLE guy…

This lass tried to pass for “Mrs. Hudson” at The Sherlock Holmes Museum. Wouldn’t fool a child. When I tried to get her picture, she ran.

On the way to Trafalgar to establish my tourist cover, I stopped at a Virgin store for a couple of cheap mobiles, just for this mission. 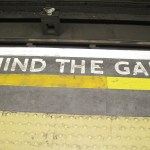 There were many dangers on this mission; not all of them were this obvious.

Longest queue in the world, waiting at Heathrow to get into the country. Trying following me in THIS, Toby!

5 thoughts on “My (successful) Quest for George Smiley”