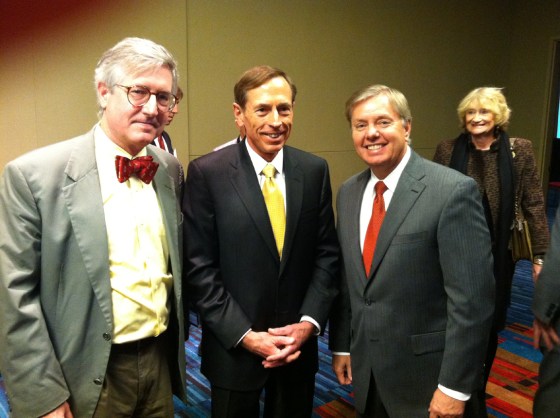 Some guy who needs a haircut, the general in mufti, and our senior senator./photo by Christy Cox

Gen. David Petraeus, now of the CIA, spoke today in Columbia, at the Riley Institute’s David Wilkins Awards for Excellence in Legislative and Civic Leadership luncheon.

Rep. James Smith and former Blue Cross CEO Ed Sellers were the recipients. It was James (a.k.a. Capt. Smith) who, in his acceptance speech, called Petraeus “the Eisenhower of our generation.” I concur. There’s no general officer in recent years who combines Ike’s strategic vision, diplomatic skill and leadership qualities to the extent that Gen. Petraeus does.

For his part, Petraeus praised not only James and Ed, but the troops he has felt privileged to lead before joining Central Intelligence. He called them “our new greatest generation.”

Those who serve certainly deserve that sobriquet. The difference is that they are only a tiny sliver of an actual generation, unlike the one that overcame the Depression and beat Hitler and Tojo.

Which only underlines how much the rest of us owe to them, each of them, from the commanding general to the lowliest buck private.

21 thoughts on ““Eisenhower of our generation” visits Columbia”