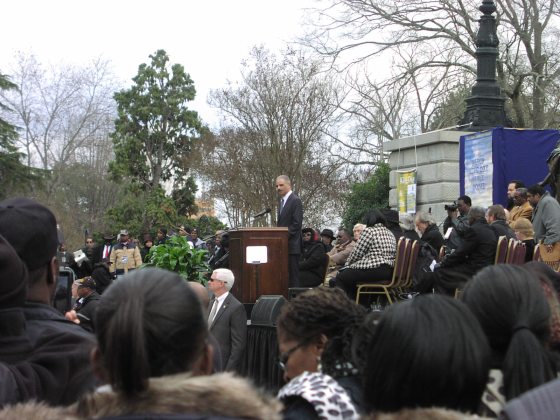 Michael Rodgers shares the above photo, and this report:

At the S. C. NAACP’s King Day at the Dome, Attorney General Eric Holder reminded everyone that the Voting Rights Act was reauthorized in 2006 and that that reauthorization was signed into law by President George W. Bush.  Here’s a picture I took of Mr. Holder (attached).
Here’s a link to Mr. Bush’s statements when signing the bill.
http://georgewbush-whitehouse.archives.gov/news/releases/2006/07/20060727.html

I’m glad to have this contribution, as I didn’t make it to the dome today — unlike four years ago, when I and thousands of others froze listening to Barack Obama, Hillary Clinton, and John Edwards. Good thing for Obama that he had borrowed our bathroom at The State to don some longjohns. He had been there for his endorsement interview with us.

It’s good to hear that Gen. Holder gave that credit to the previous administration. It’s always good when we emphasize the values that unite us, and take a break from dwelling on our divisions.

The only MLK event I made it to today was the annual Columbia Urban League breakfast at Brookland Baptist in West Columbia. All sorts of folks were there. I was writing down names…

… but then I got tired and quit. There were just too many people I knew.

The most remarkable thing that happened, to my mind, at the breakfast was this: Ever since the historic King Day at the Dome in 2000, which drew 60,000 people demanding that the Confederate Flag come off the dome, there had been a certain tension between civil rights organizers in the community.

Some Urban League supporters (I was on the CUL board at the time, which is why I was privy to all this) at the time had felt like that was their event, that they had pulled it together, but that the NAACP had sort of hijacked it, and claimed undue credit. So over the years, there has been a slight sense of rivalry, with the Urban League having the breakfast (which is always attended by a lot of business and p0litical leaders) and the NAACP having the limelight at the State House rally — although many people attended both.

The tension was behind the scenes, but painfully palpable.

I think that’s behind us now. Today, I was touched by something Urban League President J. T. McLawhorn went out of his way to do at the breakfast: Twice, he urged those assembled to attend the NAACP event — and essentially calling it that, giving his clear support to the other organization and its observance. Maybe he has done this in previous years and I missed it, but this really grabbed my attention this morning.

I thought that was a fine thing to do. I appreciated it. I think Dr. King would have, too.