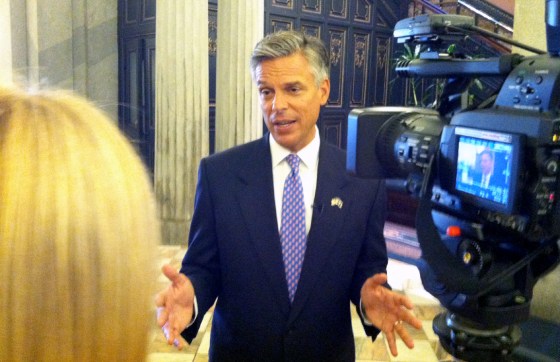 Huntsman in South Carolina in August.

The Boston Globe‘s endorsement of Jon Huntsman was strong, particularly in the way the paper set the scene and explained what was at stake (something most of the candidates have failed to do):

DISSATISFACTION WITH the economy, expressed in spasms of anger toward Wall Street and Washington; the dashed hopes of many who believed that Barack Obama’s election would create a new spirit of unity; and genuine uncertainty about Democratic health care reform – all of these have created an historic opportunity for the Republican Party. Just three years removed from a Republican administration that was roundly judged a failure, the party has a chance to renew itself – to blaze a path to bipartisan action on the budget, to introduce market-based solutions to health costs, and to construct a post-Iraq War network of alliances to promote global economic strength, knowing that true security comes from both peace and prosperity.

So far, Republican presidential contenders have shown little awareness of this opportunity. Far from promoting bipartisan unity, the GOP candidates have even abandoned Ronald Reagan’s “11th commandment” (“Though shalt not speak ill of another Republican”), shattering the party’s customary internal unity in an electric storm of name-calling and accusations. Rather than compare creative policy solutions, the candidates have vied for meaningless titles like “true conservative.’’ Rather than outline a vision for a safer world, they’ve signaled a return to Bush-era posturing and disdain for allies who don’t blindly serve American interests…

Then, there is the reasoning presented for Huntsman himself:

With a strong record as governor of Utah and US ambassador to China, arguably the most important overseas diplomatic post, Huntsman’s credentials match those of anyone in the field. He would be the best candidate to seize this moment in GOP history, and the best-prepared to be president.

Huntsman governed Utah as a clear conservative who nonetheless put the interests of his state ahead of ideology. He delighted right-wing supporters by replacing a graduated state income tax with a flat tax. Strong economic growth put Utah in the top five in job creation during Huntsman’s tenure, while he gave tax credits to companies developing solar energy. He offered a sweeping school choice plan, and joined the Western Climate Initiative, which set goals for reducing greenhouse gases.

When the national economy fell into recession, some Republican governors made a show of rejecting federal stimulus money on ideological grounds; sensibly, Huntsman took the money. While he endorsed the notion of a federal stimulus, he also offered a credible critique of the way the Democratic Congress had structured the plan. Then, when Obama offered him the post of ambassador to China, Huntsman accepted. Other Republicans, such as New Hampshire’s Judd Gregg, couldn’t bring themselves to accept entreaties from a Democratic president. Huntsman did. It attests to his sincerity when he vows to lead in a bipartisan spirit.

Serving as ambassador to China, the largest economic and military competitor to the United States, is a deeply meaningful credential. Notably, Huntsman’s nuanced foreign-policy vision of economic and strategic alliances stems from his time in Beijing. While other candidates point toward Cold War-style rejection and isolation of China, Huntsman promises deeper engagement. But he had the courage as ambassador to walk among protesters, drawing the ire of repressive Chinese authorities…

Now watch as Republican partisans dismiss the endorsement as worthless because it came from a “liberal newspaper.” Which to an intelligent person should be irrelevant, of course — either the endorsement shows wisdom or it does not. This one does, and that fact that partisans will dismiss it is further testimony, as if we needed any, to the distortions partisanship causes to the human mind.

A person free of such handicaps, an person with a penetrating, unfettered mind, can see that Huntsman has presented himself as the most serious, least desperate candidate. Even in small things: The Huntsman ad that I embedded here on the blog a few days ago shows a perspicacity, a discernment, a seriousness that no other candidate has either been able, or has dared, to show. A 30-second ad is a pathetic thing upon which to judge a candidate. But the tragedy of this nation is that so many voters base their judgments on so little. And it says a lot about Huntsman that he can pack more meaning into such a medium.

As The Globe says, Romney comes next in this regard, but his desperation to pander, to stoop to conquer, means he falls far short of Huntsman. And of course, The Globe knows Romney far better than I do.

27 thoughts on “The Boston Globe’s endorsement of Huntsman”