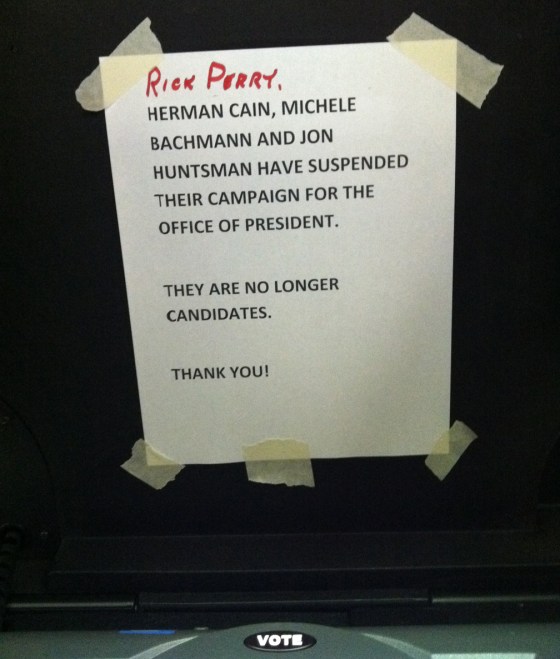 I was taken aback when I saw this sign taped up inside my voting “booth” on Saturday.

Is this official? Did they have them at your polling place? And if so, doesn’t it bother you a little?

On the one hand it’s sort of thoughtful — yes, these people are still on the ballot but no, they’re not still running. Sort of as a guide to the voters.

But on the other — do election officials have any business at all giving voters guidance on whom they should or should not vote for? No, it doesn’t say, “don’t vote for these people,” but the implication is there.

Yeah, I realize this is kinda how-many-angels-on-the-head-of-a-pin stuff, but still: Don’t I have a right to vote for anyone I want to, whether that person is a willing candidate or not? And should I be discouraged from doing so, however kindly or helpful the person who put up the sign meant to be?

My favorite part was Rick Perry being hastily added by hand. I mean, what was to stop the voter ahead of me from adding in red marker, “Mitt Romney?” (Hey, maybe somebody did. Maybe that explains the primary outcome.)

22 thoughts on “Were these signs at the polling place kosher?”